The Good Feeling Music of… – Dent May & His Magnificent Ukulele 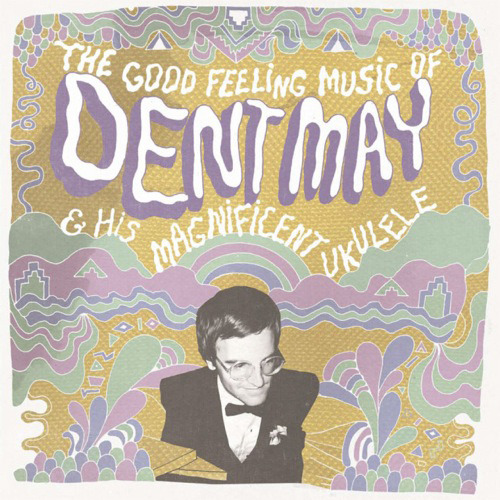 The Good Feeling Music of Dent May & His Magnificent Ukulele begins with an a cappella ‘welcome’ that’s less Beach Boys than Gay Parade-era Of Montreal, and while it’s not entirely indicative of the rest of the album, it does introduce May’s fragile croon, and sets the overall tone for what’s to come: geeky.

Improbably coming from the Oxford, Mississippi area—home of Ole Miss, the quintessential Southern preppy douchebag state university—May is the geekiest looking musician we’ve seen since Erlend Øye. But appearances aside, it’s the comparisons to Jens Lekman that will haunt May the most, even if he lacks the inventiveness and power to emotionally devastate that Lekman has mastered. The songs here share a similarly, ambiguously retro feel with Lekman’s work, and typically indulge in some genrelogical mix-and-match, but never with much daring, and thus never with genuinely exciting results.

Album standout “Meet Me In The Garden” mixes a tropicalia beat, Western/exotica/Gainsbourg’s “Bonny & Clyde” ‘doo woos,’ and Latin strings for a vaguely lounge aesthetic that pervades several of the other tracks and which May often plays up by sporting a tuxedo, cocktail in hand. But Bryan Ferry he ain’t, and unlike fellow faux suave Neil Hannon, while he has a predilection for humorous rhyming couplets, May can’t seem to separate wry wit from cornball goof.

If, however, you can tolerate songs that are trying to be funny, Dent May writes some pretty good ones, and when he tones down the shtick, like on “Girls on the Square” and “I’m An Alcoholic,” he proves himself to be quite the balladeer. Even so, nothing here seems to have much staying power, and May’s bag of tricks turns out to be rather shallow, but Good Feeling Music does indicate the potential for something special down the line. Until then, Dent May still has the potential to be a big hit among college girls, middle-aged NPR listeners, and those who prefer their music ‘adorable.’