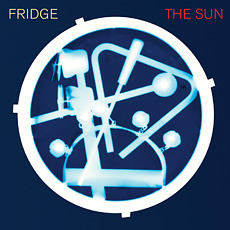 Despite the grandiose 70s prog-style title and the ‘cosmic’ track-names, The Sun actually sounds fairly rootsy; acoustic guitars, clattering garage-drums, the odd creak of a drum-stool. More like a bunch of scruffy students playing prog covers than anything Yes might have produced. A sound which of course has its roguish charms; as their press release says, “The pure and simple fun of playing music with friends that you can hear in a garage pours off the record.” It’s true to a certain extent, though certain listeners might not feel satisfied with what sounds at times like a straight-to-tape recorded jam session in a garage. Especially not after six years absence.

The thing is, Fridge used to make very serious, ambitious music. Semaphore pioneered a ground-breaking new streamlined post-rock sound, the trio’s clean, cerebral math-grooving providing an engrossing counter-argument to the dynamic extremism and cinematic scale of post-rock peers such as Mogwai and Godspeed. EPH continued to showcase their hypnotic math-grooves, whilst also demonstrating an extraordinary gift for writing melodies that defied expectation, soaring angular lines that reached far into the right side of the brain and left you grinning on their way out in toothy satisfaction. The melody on ‘Ark’, the first tune on EPH, sounded like the answer to some divine equation. So much so that I notated it and had it as the ring-tone on my phone for several months. It felt like they had found a new way for rock to move people. There was no need for skin-blistering volume, for two drummers, five cellists, seven marimba players (or whatever the crazy Godspeed lineup was in ’99), all you needed was three friends, some instruments and some enormous brains. There was a cleaner, neater way of doing things.

But Fridge has felt more and more like a side-project. Something Kieran Hebden, Adem Ilhan and Sam Jeffers do on Sundays after a few beers, to relax away from their incredibly successful electronica, space-folk and web design (respectively) projects. A forum to casually explore new ideas without the pressure of having to produce something cohesive and complete. Which is a shame, as I think Fridge deserves to be treated as a band in its own right.

Not that The Sun is really a bad album. It works best when the band get into some proper math-rocking as on “The Clocks”, when it gets going, and my personal favourite, “Eyelids” – yet, even though the grooves on these tracks are sublime, it feels as though the band are merely riffing, the music left unfinished, gagging for a tune. One of those jagged, crunchy ones off EPH for instance.

Probably the most interesting track is “Comets”, which with its old-skool drum-machine and imposing synth-pad is also the one real sonic departure from the rest of the album’s acoustic homefires vibe. It plays out an interesting drama, whereby the brash synth and mechanical drums are slowly incorporated into a framework of lyrical harmony, warm double-bass lines and whimsical riffing to create something that is soft and pretty, the original sounds de-vulgarised and clothed, now part of a big, beautiful whole. By enacting a kind of reverse-analysis, by which the deconstructed fragments are introduced before being incorporated into the complete texture, the track hints at the potential ugliness of analysis, instructing us to take the music at face value. The track also contains the album’s one real whistleable melody, and includes enough of that mathematical vibe to keep the right side of the brain aroused – the bass plays in 3 while the beat is in 4.

“Lost Time” also contains moments of real, ecstatic beauty as layers of quavering vocals are built up into a wall of wailing, in a not un-Animal Collective-esque stylee. You would not think that lost time was something these lads had ever really suffered from, Kieran Hebden has accomplished more in the last ten years than most of us hope to achieve in a whole career, but there is real passion in those tremulous voices.

Overall though, The Sun is a bit of a disappointment. A bit too scrappy and unfocussed. It sounds like Fridge need to make a decision whether or not to take the band as seriously as their other projects. I for one hope they do; I want another “Ark”.