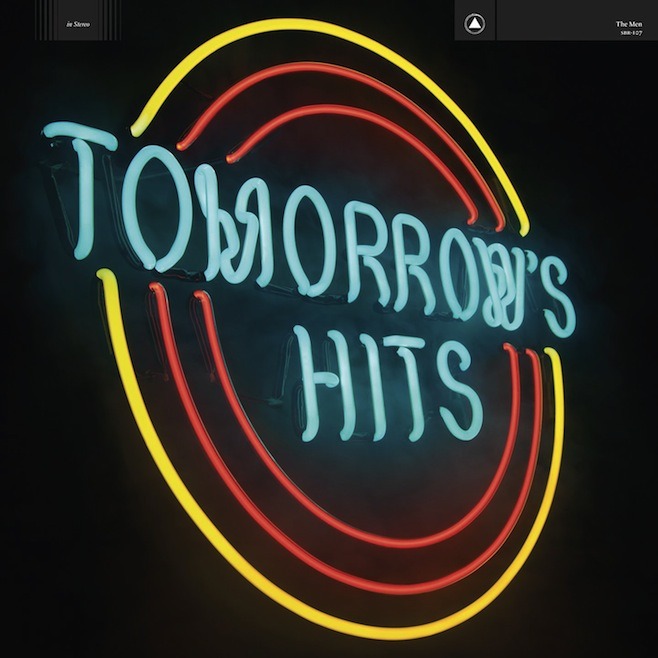 Of the multitude of genre descriptors at hand in the information age, I have to say that “dad rock” is my favorite. No group prides itself on having invented the genre as such, and no group calls itself a “dad rock” band, but it’s a lot like the legal definition of obscenity: you know it when you see it. Reviewing The Men’s 2013 New Moon, Stuart Berman said that “every grungy, guitar powered act… eventually goes a little Crazy Horse, gradually easing their squalling sludgefeasts into a classic rock comfort zone.” Upon the recent release of Tomorrow’s Hits, I would like to take this statement one step further and say (without too much value judgment) that The Men are now in “dad rock” territory.

The Men’s music has always presented itself pretty straightforwardly as a sort of jumble-up of their expansive influences—one of the delights of listening to Immaculada and Leave Home was speculating on the contents of the group’s record collections, hearing Spacemen 3 collide with Pentagram. But looking back over my notes from listening to Tomorrow’s Hits, I notice that the phrase “straight up” recurs about a million times. Admittedly, this says something about my vocabulary, but it also says the jumble is gone—“Another Night,” I noted, is “straight up E-Street Band;” “Sleepless” is “straight up Neil Young;” “Dark Waltz” is “straight up Jackson Browne.” A moment of “Settle Me Down” is “straight up Big Star,” and the cover is straight up #1 Record.

At first listen, that really put me off. I thought of making a review in the form of a playlist—each song replaced by a song it might be an attempt to rewrite. But that would emphasize the presence of recycled ideas as a problem and not an inevitability—an aging band toying with an aged form (rock n’ roll, recorded in detail since the moment of its birth) will re-use tired ideas, especially if they feel the need to put out a new album every year. The album’s lyrics hit accordingly on the themes of recycled ideas and the need to produce. On “Dark Waltz,” Nick Chiericozzi sings “All the songs you sing, I sing them back to you.” “Get What You Give” has him singing “I’d love to lie in bed, but I gotta catch this song.” Whether that’s because it’s his job now, or because of some irresistible creative urge, he never does say.

I found the album’s highlights to be “Settle Me Down” and “Pearly Gates.” “Settle Me Down” features an earnestly delivered melody that recalls, as I mentioned above, Big Star’s “Thirteen.” “Pearly Gates” is a pure rock and roll pissing contest—I mean that in the best way, because if you’re going down the “dad rock” road, what fun is it if you can’t have a gleeful moment of collective shredding. Free Bird! The lyrics, though, are a little unsettling, seeming to come from a mass murderer—and I can’t decide if it’s an interesting moment of showy instability or if, in the context of this album, it’s The Men grasping at an edge they know is otherwise missing.

The Men aren’t alone in re-doing the rock n’ roll of the past. It’s a club they first visited in 2013 with New Moon, and are now joining whole-heartedly with Tomorrow’s Hits; there are other touring bands whose careers have followed the same trajectory. Lucero, for example, has followed an arc toward a bigger band and a more classic-rock sound. The same is true of Natural Child, who seem to get more old-school with every release—although, they manage to escape the “dad rock” descriptor by way of their irreverence. Not that there’s anything really wrong with dad rock. If a good sound and attitude comes into being, there’s something admirable in the urge to preserve the act and not just the recordings; the problem, then, is how can a group with artistic integrity do this without becoming as boring as a wedding band? As far as Tomorrow’s Hits is concerned, it’s not bad, but it’s not vital either. If you’re looking for something with a little more edge and urgency to it, The Men have certainly done better.