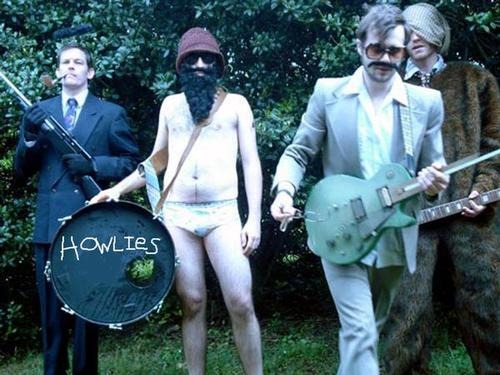 This throwback Hotlanta-based foursome (Justin Brooke-guitar/vox, Brandon Morrison-guitar/vox, Matt Forsee-bass, Aaron Wood-drums) is not nearly as fucked-up and sleazy as the Black Lips, but they’re more eclectic and entertaining than their own “persona” might indicate.

Produced by the quasi-legendary (in his own mind) Kim Fowley, they mash up elements of 60s garage rock, with a tinge of surf rock and pop-psych, along with “ATL crunk and doo-wop.” The plaudits in the press for this band have been over the moon, “frenetic, melodic rockers rooted in Chuck Berry and Link Wray, with a tinge of Rocket From The Crypt-style melodrama…” Wow! “…brought jaws to the floor with their breakneck rhythmic ferocity and ghoulish gang vocals…” Holy shit!

To call them “ferocious,” as Fowley does, is just silly. On record they are nothing of the kind. Bobbing from the garage to the beach to the sock hop to the bowling alley in a few turns, as they do, is, actually, not unlike the work of late 80s college-radio giants Junior Gone Wild.

Fowley’s production is a little soft in places, but their best songs, like “Chimera” and “Angeline,” have a shimmery post-80s quality that shines through. “Chimera” is an excellent song (with a swell vocal part) that should definitely find a home on college radio stations like WMSE.

Fowley also penned the liner notes for the record and, oddly, he compares this album to the Ramones, Sex Pistols and the Trashmen, and he declares the Howlies to be “the first Rock ‘n’ Roll band of the 21st Century.” Whoa! Talk about putting pressure on a band. I don’t think I’d go that far, but never let it be said that Fowley wasn’t, ultimately, bigger than the bands he produces. A great American self-promoter. Rock on.