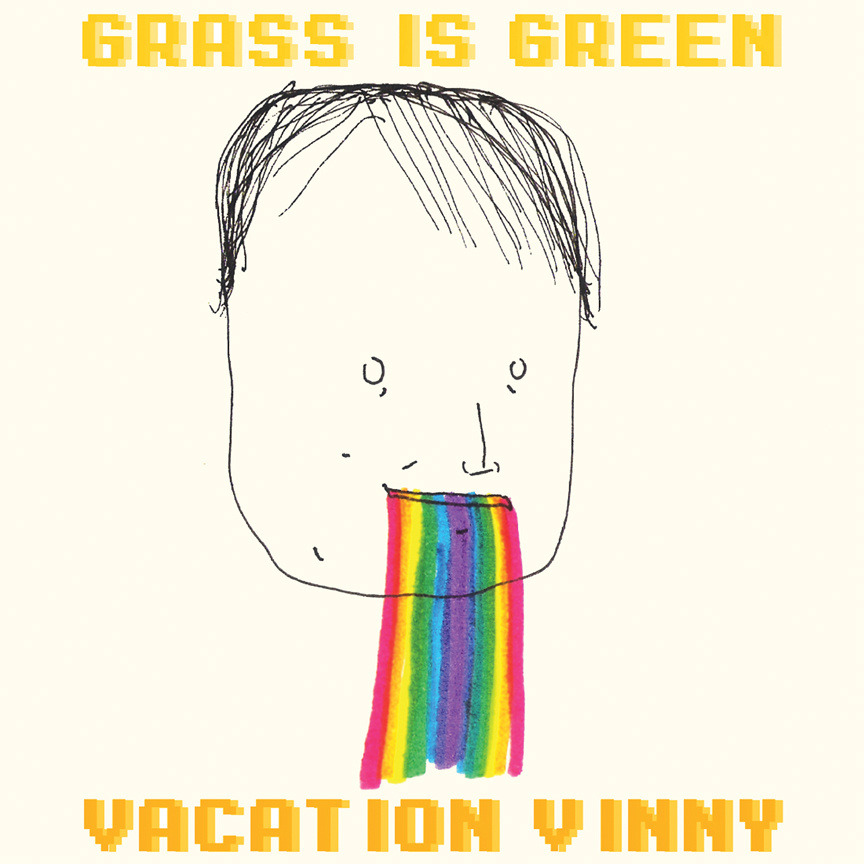 To bands like Grass Is Green their music isn't especially inchoate and angular, the world is already that way. Or, rephrased: They don't sound crazy, it's everyone else who's nuts.The crazy person is the one who lays in his or her bed listening to mainstream rock, someone sitting there listening to Imagine Dragons or the last few seconds of Mumford and Sons' passing fame. How could bands and music listeners so clean up what is such an incoherent and anxious age? The irony being, this isn't about lack of attention, the supposed coolness of being ignored – punk's classic and most marketable angle.

Grass Is Green emerges as part of a growing grunge and punk aesthetic that threatens to cross into the mainstream in the coming few years. Maybe not surprisingly the heart of sophomore LP Vacation Vinny is the lyric from lead track, “Sammy So-Sick” , singer Andy Chervenak wails, “Can't believe how good it feels / I'm feeling so alive” before trailing off with “Can't figure it out.” Lifting elements of Malkmus' work with Pavement and Marstch's big guitar symphonies, Grass Is Green drags 1990s hardcore and indie rock back to the basement on Vacation Vinny, only for it to emerge as a tweaking and hook-filled monster, ironically ready for mainstream independent rock fans to adore.The band has already opened for relative titans Speedy Ortiz who opened for the Breeders, which by applying the transitive property means Grass Is Green is something like one time slot from rock stardom – another pleasant contradiction.

Some of the charm of Vacation Vinny is its mixture of brutality and pith. Second track, “Disjoint” clocking in under two minutes, spills out of Chervenak's upper register like a torrent. The guitars sound the alarm from behind him, the lead singer eventually reduced to a muttering and shivering mess before the final chorus. But even as the band pushes the arrangement to hold so many disparate and, at times, dissonant elements, the pop sensibilities, however seemingly lost, always hover at the edges. It isn't a traditional summer jam, despite Chervenak's insistence that he's “on vacation”; these kids aren't going to the beach, they're drinking in parking lots and basements. The see-sawing instrumental, “I'm From Dot Too” sets a jazzy bass line against tweaking, screeching guitars. It's a conversation of a different sort, a frankly unpleasant 90 seconds, but this is the point. For each minute Vacation Vinny begins to feel like a party, Grass Is Green insist that you weren't supposed to be having such a good time. “Tambo”, another instrumental interlude and the second to last track, rips along in fits and starts, recalling Isaac Brock's early work with Modest Mouse. But this is a short drive for someone who has lots to think about.

The stand out proves to be the third track, “Big Dog Tee Shirt Birthday Weekend”, where a Built to Spill-esque guitar arrangement churns and explodes behind Chervenak as he sings portentous and cliched lyrics like, “Waiting for something to happen / I won't hold my breath” and “You don't have to lie to me / but I'll miss your alibis.” It isn't quite “You get the car / I'll get the night off”, but there is an essential quality, a middle class necessity that grants Grass Is Green a dose of the immediate and the visceral. Album closer “Vacation 2.0” rips the guitars between right and left audio channels, a descent into audible madness that eventually leaves the listener as wasted as the band. If you aren't supposed to feel particularly good about what it means to live in 2014, you can at least sweat and heave to the finish. This isn't the Age of Good Times, but it certainly is one rich with complex emotion. On “Battering Ram”, Chervernak moans, “I sincerely hope you don't get too choked up / from getting overly excited”, a blithe wink for critical distance on an album that grabs the listener by his or her face and refuses to let go.

Punk and independent rock bands hold the power to correct and alter focus, a brand of reactionary or progressive music politics that will carry the mainstream far from the gutless and bourgeois neo-folk that has imperially shared the spotlight with synthesizer bands for the past five years. Grass Is Green refuses compromise with its peers, instead channeling influences from two decades past and filling them with the sharp double-narratives of modern life. When the world goes crazy, sometimes it's the only choice.