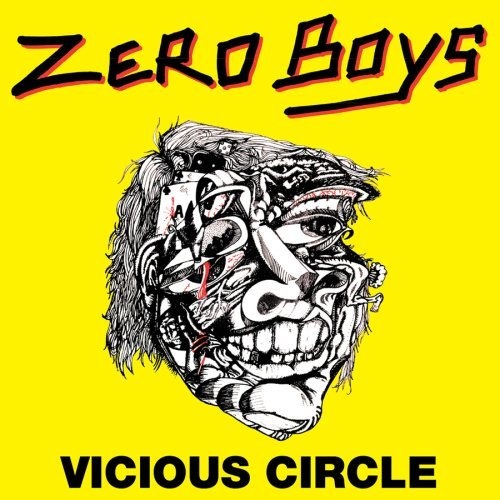 The production is bright and loud with a sinister boom to the bottom end. This, along with the furious and intricate guitar riffs, serves to push the music beyond the limited scope of hardcore into the mainstream rock vein. In fact, most of the album sounds a lot like another band that successfully built a fanbase on harder roots carried into the mainstream. “Dirty Alleys/Dirty Minds” all but functions as a blueprint for Guns ‘n Roses’ “Welcome to the Jungle”, so much so that even Axl’s high-pitched whine is presaged in frontman Paul Mahern’s sneering admonishments that you “better run little boy, better run little girl… This ain’t the safe Midwest.” It’s the classic riches to rags, midwest ingénue travels to the coast story foretold a short five years before Appetite for Destruction came out. Track “Hightime” is the Donnas’ formula perfected before they were out of short pants and into shorter ones.

Zero Boys’ sound was formed when the NY and London scene and sound of punk was in full swing with plenty of material for new bands to refer to and build on. The West Coast DIY scene was just gaining a national touring and distribution foothold. The band rose out of this mélange to produce one of the most ferocious and at the same time rock-influenced hardcore records of the day.

Mahern was moved to kick the Aerosmith and start a punk band after discovering the Sex Pistols on the cover of rock rag Creem. It’s fitting, then, that this second re-release (it had already been re-pressed in 1988 by label Toxic Shock) should arrive hot in this latest flash of the ‘90s shoegaze/jangle pop pan, just as a slew of new musicians and fans are digging backwards, piecing together the influences of the greatest bands of the late eighties and early nineties they’ve only just heard.

With stellar releases from bands like Dillinger Four, Gaslight Anthem, and Against Me! All in this past year, can we, once the last jangle’s ring has faded from the current reinvention of the ‘90s pop canon, expect someone to come along and, as Against Me! titled one of their albums, try their hand at reinventing Axl Rose?

Vicious Circle gives a damn good reason go ahead and push that cycle through one more time.