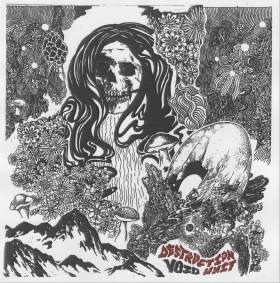 Ryan Rousseau founded Destruction Unit over ten years ago with the release of a damaged synth-punk EP entitled My Disease. Rousseau then split his time between Memphis and his native Arizona as a member of both The Reatards and Digital Leather. In 2010, he reinvigorated Destruction Unit and released Eclipse. Void, the fifth Destruction Unit album over all but third in this spurt of activity, is the most mature album yet. It retains the synthesizer saturation and propulsive grooves of earlier work, but the production is rich and furthers the desert-borne psychedelic terror more effectively.

Void is an apt title for Destruction Unit’s latest work. The group conjures desert imagery with each track, but presents the wide, scorched earth as a complicated space. Certain tracks are spacious and dawdling, evoking a cold and alienating place. Others badger listeners with plodding and savage repetition – a reminder that a great, vast nothingness is something to fear as well. Similar themes emerged on earlier Destruction Unit work, but Void’s production and instrumental textures are at their most thoughtful. The attention to detail allows such dynamic moods to be fully realized.

Like Sonoran, Destruction Unit’s last album, Void is comprised of six tracks; two of which hover around eight minutes long. Destruction Unit dutifully represents their arid, desert locale of Tempe, Arizona in the spacious tracks. Void presents listeners with a desert that’s vast, but also hostile. With the album’s nebulous, instrumental soundscape “Druglore” sequenced early on, Destruction Unit dwells in reflection on some remote plateau where the expansive desert encourages introspection, but the reflective mood doesn’t last. Soaring guitar leads and towering synthesizer textures mingle with dense feedback on “Great Wall” and “Exterminate,” and the most predatory elements of a barren desert rush forth.

Reinforcing the sense of encroaching hostility, Rousseau’s lead vocals are burlier than ever. They’re drenched in effects and mixed low, but the assertiveness in his delivery overcomes the production. The music vamps for measures at a time without words and one of its longest tracks is strictly instrumental. So, when vocals emerge, they’re relegated to the importance of another instrument rather than acting as focal point. It’s a technique appropriated from druggy psychedelia, but Rousseau’s fierce delivery and the menacing instrumental textures defy rigid classification.

Arizona’s desert landscape influences every Destruction Unit release, but none do so this thoroughly. Earlier work was directed more by Rousseau’s affinity for synth-punk, hindered by his involvement with multiple bands simultaneously and generally more informed by circumstance. Void speaks the truth of Destruction Unit’s dehydrated psyche and labors intensely to articulate it.