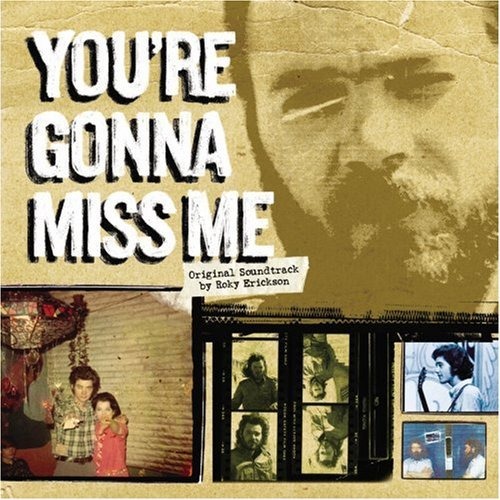 Although many people still don’t know their names, artists like Roky Erickson, Shane MacGowan, Syd Barrett and Brian Jones are rock and roll horror stories shared around campfires and sound systems across the country. Before the incident that changed his life, Roky Erickson was the singer and guitar player for cult psychedelic rock act The 13th Floor Elevators, who are best known for their left of field hit, “You’re Gonna Miss Me”, from which the film which this is the accompanying soundtrack takes its name. The band was known for high octane roots rock ‘n’ roll with a psychedelic twist. Also, like many young bands at the time, The 13th Floor Elevators were vocal proponents of marijuana, LSD and other psychedelic drugs. These weirdos with their crazy ideas and crazier clothing easily stood out in Texas in the middle to late 60s and as such they were often harassed by police officers. One day in Austin in 1969, Roky was being hassled by a local cop. The copper reached in Roky’s pocket and pulled out a single marijuana joint and quickly arrested him. Roky was obviously freaked out by this, not only because he was getting arrested, but because at the time possession of marijuana came with a mandatory sentence of ten years (remember the John Lennon song about MC5 manager John Sinclair in which the lyric went, “They gave him ten for two”). Faced with this strict jail sentence, Roky did what most of us would think was a good move and plead insanity. Unfortunately for Roky, they did not go too easy on him. He was sent to several mental hospitals from which he tried to escape while being administered treatments and medicines he did not need, including electroshock therapy and massive amounts of thorazine.

Roky was released from psychiatric care in 1974, but he was different. The normal kid from Austin with the amazing voice was now actually insane. He stole mail from his neighbors and brought it into his home and taped them to the walls. He claimed that a Martian had entered his body. Clearly, not the actions of a sane man. But insane are not the man could write music. After his release he formed a new band called The Aliens. The Aliens drifted away from psychedelic rock and became a harder rock band that some would call heavy metal. The lyric content of The Aliens’ music was mostly taken from old horror or Sci-fi films. Hence songs like “Bloody Hammer” and “Two Headed Dog (Red Temple Prayer)”. Despite, the insanity of many of his ideas, Roky has magic flowing through his finger tips. Nearly everything he has released has been genius, even the song “I Walked With A Zombie” in which he just yells, “Zombie” over and over.

Now that you know what is going to make this film a must watch, why don’t we talk about the music included in the soundtrack. We get two songs from The 13th Floor Elevators debut album, The Psychedelic Sounds of the 13th Floor Elevators, and a couple of cuts from his second group, The Aliens, all of which, if you are familiar with the man, you have probably heard before. But if for some reason you have missed out on Roky Erickson, it’s a fine, if not short-winded, introduction to his music. The real treat is the several solo songs that are included in the set. Roky Erikson can write a damn fine rock and roll song but who knew his music sounded just as great without electricity flowing through it? His solo recordings are insanely catchy and oddly relevant to today’s alt-folk scene. I wouldn’t be shocked to find that artists like The Mountain Goats, Iron and Wine and Magnolia Electric Co covered some of his solo work at their live shows. It’s not surprising because Roky was always ahead of the curve. His work with The 13th Floor Elevators saw and perfected garage rock. The Aliens’ music was a clear forerunner of heavy metal. And his solo work has pre-dated the alt-folk explosion.

Many artists will tell you that for better or worse their hit single defines them. And I think Roky Erikson is included with this group. Not because he didn’t make genius music afterwards, but because it so defines him. We really are going to miss him when he is gone. Roky Erickson has proved to be a true original and a musical ground breaker who has changed the course of music. The famous quote about The Velvet Underground goes, “They didn’t sell many records, but everyone who heard them started a band”. Well, the same can be said about Roky Erickson. Most people don’t know Roky Erickson, but those that do know full well that the world would be a darker place without him.

PrevPreviousThe Politik – The Politik
NextThe Hair, The TV, The Baby, and The Band – Imperial TeenNext