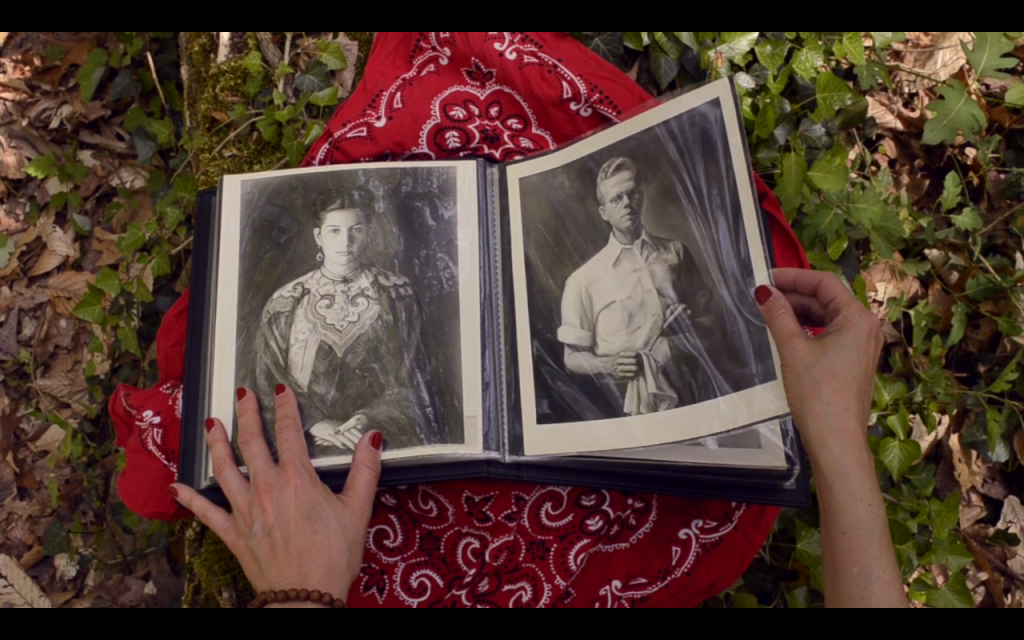 Beyond the immersive ambience and textured drumming that defined Galaxie 500’s radically meditative dream-rock, the band always seemed to be getting at something more embedded, a sense of surrealism. It’s an aesthetic impulse that has surfaced even more clearly in the later work of Damon Krukowski and Naomi Yang – via the avant-garde literature they’ve released with Exact Change, Yang’s moody video work, and their continued musical output as Damon & Naomi.

Indeed, the lyrics on their new record, the soundtrack to Yang’s first short film, Fortune, were written while playing “an old Surrealist game,” she explains. “We made an ‘Exquisite Corpse’ for each song, each writing a line of lyric without showing the other, folding the paper over and just leaving the first word of the next line for the other to write their line from. We passed the paper back and forth until we felt like we were done, we unrolled the paper, and then we edited down what we had written to the parts we liked and what fit with the song.” The creative process was an attempt to write expressive lyrics that didn’t distract from the film’s visual narrative, which was crafted collaboratively over two years with their longtime friend Norman von Holtzendorff.

The Fortune soundtrack, entirely scored by Damon & Naomi, is officially out today, on the duo’s own label 20/20/20, which is also celebrating its 10 year anniversary. “A Shining Dream” is the film’s first video single, a clip from the film that depicts Von Holtzendorff smelling flowers in a mystical overgrown garden spliced with shots where he’s wandering a hotel room hallway and flipping through old family photos. It’s an apt glimpse into the film’s abstract plot as well as the score’s slow, woven acoustic guitars and layers of poetic harmonies.

In advance of Fortune‘s release, we spoke with Yang about this project’s creative process, her video work, and more.

For some context on this clip, can you explain the general plot of Fortune? Where in the narrative are we at this point Why did you pick this clip in particular to use as a stand alone music video?

“Fortune” is a silent movie that I made with Norman von Holtzendorff. Norman and I have been friends since college. He actually photographed Galaxie 500 for the cover of “This is Our Music” and has shot promo photographs for us as Damon & Naomi. Dressing up and photographing each other has been part of our relationship for many years.

“Fortune” is semi-biographical. The story is inspired by Norman’s complicated relationship with his father who was a portrait painter. After his father’s death, Norman was left in charge of his father’s life’s work. “Fortune” is an exploration of Norman’s grief — his feelings toward his father as a flawed parent — but a gifted artist — and his search, in his own life, for self-expression and happiness. The clip here is a dream sequence that occurs about a third the way through the film. Norman, burdened and depressed, dreams of a time when he has found some peace of mind, some contentment. I particularly love this song, and I thought that this episode could stand well by itself, sort of the music video inside the silent move.

What was the writing process like for this sort of project?

The film did not have a script, it did not even have a storyline when we started, that arc really developed in the editing and in the fact that we shot the footage over a long period of time. Originally I had the simple idea to film Norman and to use the footage as a backdrop for our live show. Norman has a great love of silent film stars and of the dramatic, and we just started to film little scenarios that Norman and I came up with together, things that were emblematic of Norman’s state of mind living in DC, working long hours, dealing with his grief and his loneliness. But we also added in some whimsical, surrealist touches too, such as a mysterious woman (well, me) leaving Norman tarot cards giving him messages — as if his fate was already decided.

We worked over about two years, shooting every few months and each time we resumed working we would base what we did somewhat on the state of mind and events in the “real” Norman’s life, and what we thought might happen to the “fictional” Norman. I shot and edited the whole film silently, with the editing assistance of master filmmaker and editor Nathaniel Dorsky. Damon and I then wrote the music afterwards to fit into the scenes as edited.

Before I started the project I had the idea that any of our music would fit it as a soundtrack — that we could screen the film and play any songs we wanted to and it would just be a visual and audio experience in tandem. But as the edit developed it became clear that the emotional content of the film really demanded that the music be a support to the image, and not so random as I had imagined.

Perhaps the hardest part was writing the lyrics. We wanted to use vocals, but we didn’t want the lyrics to be too representational of what was happening on the screen, and we didn’t want them to be irrelevant either. So Damon and I played an old surrealist game — we made an “Exquisite Corpse” for each song, each writing a line of lyric without showing the other, folding the paper over and just leaving the first word of the next line for the other to write their line from. We passed the paper back and forth until we felt like we were done, we unrolled the paper, and then we edited down what we had written to the parts we liked and what fit with the song. In that way we were both contributing our thoughts and feelings about what was happening in the film during that song, the emotional arc of the scene, but it also remained fragmented, so hopefully not overly representational.

We just started to film little scenarios that Norman and I came up with together, things that were emblematic of Norman’s state of mind living in DC, working long hours, dealing with his grief and his loneliness.

I read that the film was made after you happened upon a copy of Paul Leni’s 1924 “Waxworks”. What in particular was inspiring about that film?

We happened upon “Waxworks” when we were playing a Damon & Naomi show in Turin, Italy, at an old movie theater. At soundcheck they asked us if we had any video that we wanted to run behind our performance and we were sorry that we hadn’t thought of bringing anything. We loved the idea and thought a silent movie during the show could be interesting and fun. After soundcheck we took a walk in the neighborhood and there was a flea market on the street — selling DVDs! We flipped through the “Silent Film” section and found “Waxworks” which we had never seen, but it looked good from the cover. So we bought it and ran it behind our show and somehow it all worked. And it was pretty wonderful. We continued that Italian tour, showing the film every night behind our show and we loved the juxtaposition of the film and the music.

So it wasn’t really that film itself that sparked my thinking. We didn’t even get to watch it all the way through till we got home from the tour! It was more the fact that we tried it with that film and it worked. That’s what started me thinking about making my own silent film for our show. I had been doing music videos for others, I thought, why don’t I film something that we can use for our live show?

The film is a collaboration with Nathaniel Dorsky. I know you’ve made videos for Julia Holter, Marissa Nadler… What are some common ideas running through the work of artists you choose to collaborate with?

I think the word collaboration is at the heart of what I hope to do with the artists I work with on music videos. I have always loved that aspect of playing music and being in a band, how real collaboration with another artist allows you to do something you could never do just on your own. I usually start with a treatment, a scenario, and an idea for a look of the video that I think suits the song, but then I really like allowing each artist to adjust what we do according to what they are comfortable with, so that the music video really expresses them as much as my vision. I think of myself more as the cinematographer and co-conspirator rather than a dictatorial director.

While I’m interested in working with all kinds of bands, it does seem like I’ve been drawn to women artists like Julia Holter and Marissa Nadler. I’ve also worked with Elisa Ambrogio, Mary Lattimore, Meg Baird… None of these musicians are just trying to be like everyone else, they’re trying to forge their own path. I enjoy allowing that uniqueness to flourish and shine in the world of the music video I create for them. I feel like I have a special empathy for them, being a woman musician myself. I think it’s different for a woman to be behind the camera presenting another woman, rooting for their artistry as well as their beauty.

I think of myself more as the cinematographer and co-conspiritor rather than a dictatorial director.

Lastly, I wanted to ask you about the difficulties about making work that’s directly about family. It seems to me that writing about something so personal would be emotionally stressful but also more meaningful. What were some of the particular challenges you faced in writing this film and soundtrack?

Well, I was spared realizing that it was about me and my father as much as it was about Norman’s father, until we had already started the project. I didn’t intend to make it personal, though I find that often happens with music too — sometimes you don’t realize until after you have made something how it was exactly what you needed to express at the moment you were making it. Later, it seems so obvious that was what you were going through at the time, but at the moment you are just doing your work and you don’t necessarily have that distance on it to see that.

The coincidence of “Fortune” (or maybe it wasn’t a coincidence but why I made this with Norman?) was that my father was also an artist, a photographer, and he died and left me with the responsibility of taking care of his life’s work, about the same time as Norman had been left with his father’s work. So both Norman and I had each recently lost our fathers and we both had the same task ahead of us — we each had storage spaces filled with our father’s work and the directive that we should take care of it, that their work not be forgotten. And while we both admired our fathers as talented artists, at the same time we each struggled with a lot of feelings about how they had been as parents. In retrospect, though I felt that I was chronicling Norman working through his grief, I too was in the midst of that process.