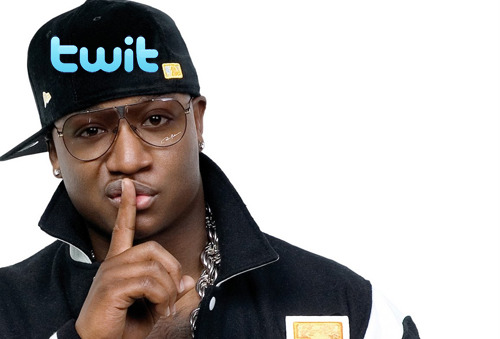 Yesterday a series of incredibly shocking Twitters, Tweets, Twats, or Whatever the Fucks from Atlanta-bred rapper Yung Joc caused a minor media frenzy that has made us all into mindless puppets in his dark, and possibly genius, game. First, a refresher:

Went to a stripper party last nite yall. They had all kinds! Fat ones.they had a midget one too! I gave her the biznss!! Midget coochie good

Things finally got interesting when a few hours later, at 2:14 PM, he wrote this ominous passage:

I'm in st. Louis in my penthouse… Katt williams and DMX are arguing about who gonna hit the last line of coke..this shit about to get ugly

At 6:29 PM, after four hours of deliberation, it seemed Williams and DMX had come to a reasonable conclusion:

SO KATT AND DMX HAD A TALK ABOUT THE LAST LONE AND DECIDED TO SHARE IT WITH THE FUCKIN DOG! IM SO SCARED CAUSE THE DOG IS LOOKING AT ME!LOL

Things quickly spiraled out of control, as can be seen in the full transcript below:

Of course, it was real, because it was twittered: Katt Williams' coked out dog almost killed Yung Joc and DMX was you know, there. It was real, because it was internet gold, and every single rap blog in the country posted on it. From a shocked post on therapup to the breaking news coverage on Bossip, the whole world was horrified by this true story. And then, he twittered:

SO AFTER RELEASING MY MINI MOVIE ON TWITTER..EVERYONE IS THINKING I GOT BIT BY A COKED UP DOG…AND EVERYBODY IS WAITING TIL TUESDAY….

THIS SHIT IS AMAZING. SO DID YALL HEAR ABOUT ME IMPREGNATING OPRAH TOO? OOH OOH OR WHAT ABOUT ME AND THE MIDGET CHICK?

MY FOLLOWERS HAVE DOUBLED BECAUSE I HAVE ONE HELL OF AN IMAGINATION. KATT WILLIAMS NOR DMX HAD ANY INVOLVEMENT IN THE TWITTER MOVIE..LMAO!!!

That son of a bitch had us all. Excuse me while I tear the wool from over my eyes. This was just like the time that Orson Welles read War of the Worlds over the radio and people freaked the fuck out, except with Joc, it never ends: he did mention in that huge farce that he was going to reveal some entertainer out there as homosexual, if he wasn't stirring up more artificial shit storms with that, too. Who could Yung Joc possibly have it out for? Himself?

If you want to encourage this behavior then you can get to his real twitter account here and join in on the tom-foolery.

Oh yeah, I fully support Joc's music, so here's a recent mixtape from dude. It's pretty solid and the quality is top notch for the most part. Enjoy!