CMJ Friday: Paradise found, or, clean that piss off your face 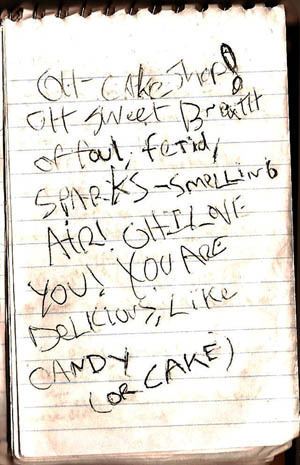 On looking them over today, our notes from Cake Shop just say this:

OH CAKE SHOP! OH SWEET BREATH OF FOUL, FETID, SPARKS-SMELLING AIR! OH I LOVE YOU! YOU ARE DELICIOUS, LIKE CANDY (OR CAKE)

We might have just popped into the ’Shop to get some free Sparks (part beer, part Red Bull, all puke) but we didn’t expect it to REDEEM MUSIC FOREVER.

The place is packed as usual, like a herd of cattle corralled in the back of a semi. “This is an Odyssey” says a fellow crowd-pusher trying to make his way to the stage. Took a couple leaps to see over the crowd to even find out who’s playing. Well, it’s Yeasayer. Another twenty minutes and we’ve pushed ourselves in a rude manner to the front, Sparks in hand, to confront Yeasayer full-on.

Yeasayer rocks like a fucking MOUNTAIN. Drummer beating on a battered cymbal that looks like its been dragged through the treads of a tank. Banging on skins and strings, pipes and drums like battle calls over weather-beaten canyons.

The music was barely contained by the walls, it surged over the huge, loafy mass of the audience and rippled all the way to the bathrooms.

The crowd got rowdy and pushed at each other and the stage. Hell, they came onto the stage. When the front drum fell over people in the crowd righted it, and started beating on it themselves. A guy reached over and screamed into the mic. People in the back hit the cymbals with their hands.

And then, the drummer just runs off the stage in sweaty exhaustion. “Sorry, we played three shows today,” they say. “We’re gonna die.”

The drummer comes back on and they set up to play one last song, one minute and a half of the fastest, craziest, most furious drum-and-jamming most people will ever experience and live to tell the tale. Then out the door, done.

We hung out in the back with Yeasayer and a bottle of Jameson and for a brief while forgot all about what an awful, Piss On Your Face night it was. Those dudes are totally made of people.

Thank you Cake Shop, for making music so beautifully ugly again. And thank you Sparks for the hangover.