CMJ Friday: The night from hell, or, Piss on my face 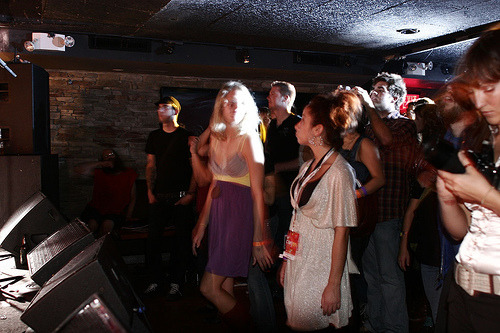 Head down to Crash Mansion on several recommendations (and orders), a venue huge for Lower East standards. Hipness drips from the walls in that place, it’s major swank. So swank it makes us kind of feel dirty.

We get into Crash Mansion in the middle of Zambri, which is fronted by three small girls with high heels, tight pants, heavy eye shadow, one wearing tights straight out of an American Apparel ad. Hell, if there were a white background it might as well be American Apparel: The Band. You know you shouldn’t stare, and yet you do.

Still, they got a poppy yet dark, Joan-Jett-meets-The-Bratz quality, with thick bass lines and jumpy rhythms.

Then, while still mesmerized by the keyboardist’s ass, we notice, standing right there in front of the stage, like a grizzly bear in the middle of a junior prom: Tim Harrington of Les Savy Fav.

What the hell is Tim Harrington doing here? Is this showcase a lot cooler than we had previously thought? Around him the crowd was starting to fill up with industry types in weird, expensive clothes, with weird, expensive girlfriends/boyfriends and shiny hair. They clutch at wine glasses.

“Stick around it’s going to be awesome! CMJ! Woo!” says the Zambri girl at the end of the set, like she was on Total Request Live.

You heard the lady. We’d better stick around.

In retrospect, sticking around was a pretty bad idea. Next up is House and Parish, which got off to a slow start and some bickering with the band mates. By the time they’re all plugged in and the singer’s shiny acoustic is nearly tuned correctly we are beginning to wonder whether Zambri-girl was right. Was it indeed going to be awesome?

Then he opened his mouth.

The only excuse we could come up with after a few songs is that they’re drunk. That would explain the awful harmonies, the bass being slightly off, the guitar being slightly out-of-tune. The lead singer kicking fliers off the stage in exasperation, stopping between songs to gulp wine.

But no, that would only explain half of it. Because, even when sober this could never, in any remote fashion, be awesome. The word “awesome” would have to completely reverse its meaning for this to be considered awesome.

The crowd has formed a respectful distance from the suckiness. About ten feet from the stage is a line of well-groomed hipsters who cheer and clap, either because they’re polite or deaf. Only one girl is moving at all, and she’s writhing in place like a Solid Gold Dancer to the non-music, which was a lot more interesting to watch than the band though just as inexplicable.

The singer stops to retune his guitar, and it’s still out of tune when he starts playing again.

In front of the hipster line is one single guy in a felt hat, right in front of the stage. “Hey, you Bono-looking fuck!” yells out the dudes next to us. A guy who looks remarkably like the lead singer of The Killers is standing near us in a flared jacket, accompanied by a woman whose every strand of hair was a different length.

We begin to realize we really are the dirtiest people at this party. Then we notice Tim Harrington again.

There he is, in the corner opposite us, scribbling away at a notebook. Why is he still here? The only answer we can come up with is that maybe he’s trying to channel the anguish of being here into some new material.

“You have time for one more song,” comes the voice of god to the now clearly drunk House And Parish.

Meanwhile, we grow increasingly bored and inebriated and start taking pictures of our beer.

We get more beer and try to remember the name of the next band but only come up with “Wheat Flakes” or “Wyld Stallyons”.

Then they start. Our worst fears come true. Not only are they emo, but they’re pop-punk emo. They sing about how much their life sucks and how you suck in little happy-rat voices while strumming power chords. Seriously, kids, our hearts bleed for you. Go drown your sorrows in some lattés at the mall with Sondra.

“I can’t pass a mirror without looking at myself twice,” one sings. But what they’re really saying is “we want to slit our wrists, but there’s a $280 blazer in the way.”

Midway in one song they stop and wonder why the keyboard’s out of tune. “How can a keyboard get out of tune? Maybe the battery’s dying.” Maybe it’s because you bought that Yamaha at Radio Shack, asshole.

We feel like hunting down that Zambri girl and slapping her silly. This is still not awesome. This is so far from awesome that if you went to look up “awesome” in the dictionary, there would just be a dark, whispering hole.

“We played this song at Randall’s Island and they hated it. But, fuck it.” They then go into a song whose chorus (and the majority of the lyrics) go “Fuck San Fransisco, Fuck California.”

We wonder if maybe the folks at Randall’s Island weren’t objecting to the song, awful as it is, but more to the band itself, and the cruel universe which allowed it to form. We try to invent the anti-clap, because booing just isn’t enough.

We go out for cigarettes. We still can’t remember the name of that awful band, and decide that they’re now called “Piss On My Face”, and Tim Harrington is actually there as a special guest, and will come on at the end of the set, beat them senseless, then piss on their faces.

OK. We’ve seen Foreign Islands before, they’re cool, they can’t be nearly as bad as the last two. They’re wild and dancey and the singer kind of raps over some driving bass. Photographers have crawled out of the stonework again and the crowd is elbow-to-elbow. It’s midnight and some of us got an hour and a half of sleep the night before.

And yet, there’s something in the air at Crash Mansion tonight, that just brings out the douchebag in everyone. Foreign Islands started going crazy, the singer getting tangled in the wires, spinning his mic around. Then he threw, literally threw, the mic into the audience, missing our camera by inches. Could have easily knocked someone’s buck teeth out, which is not cool. In fact, that’s pretty fucked up.

Down a mic they kept going, only getting angrier as the set went on, throwing the mic repeatedly against the floor. When they stormed off the stage after half a set the audience was both confused and relieved.

Crash Mansion’s headliner is MGMT, who’ve been playing around the city all week. By this time it looks like everyone who ever worked for Capital Records is here, squeezed into the room and squeezed into tight pants or loose dresses. One woman was wearing what looked either like drapes or a really nice roll of paper towels. Most seem to be enjoying the crappy dance music they play between sets more than they do the bands.

MGMT’s youthful vocals and amped-up guitars take over, but after a night of so much sucking it’s really too little, too late. The guitars are wired to seven pedals each, you’d think they could do something more interesting with them.

We’ve heard the MGMT album, we like their tunes, and yet this wasn’t enough of a live set to keep us interested. And then, we watched as Tim Harrington reappeared, grabbed his notebook, and shuffled off. Yes, that means its time to leave.

Maybe we’ve been spoiled this CMJ, but we’ve been to a whole lot of kick-ass shows this week, and the one time we end up where industry people recommended (even a CMJ employee tells us mid show that it’s the best showcase tonight) we find bland, uninspired music. Not that all the bands were bad – Zambri kept our interest, Foreign Islands has played better shows in other places, MGMT is still pretty cool – but when you put them together, you get a thick, grey paste. Media gruel, which is eaten up happily by indie radio stations and music blogs everywhere.

A’ight, we out. Let’s get some drinks.