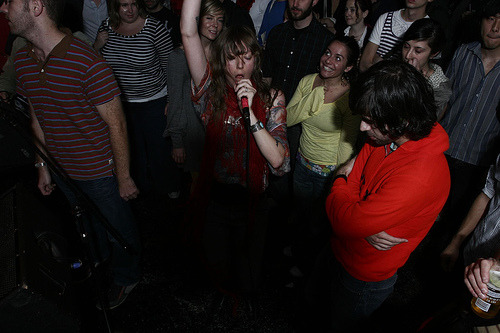 We wandered in and out of the Brooklyn Vegan show at Pianos all day. Here are some thoughts.

The lovely Joan, policewoman or no, held a fairly packed mid-afternoon crowd with a wispy, whispery set in a lineup more known for crashing than crying (Meat Puppets? For real?). Nearly everyone knew the words to her songs, and she moved between guitar and piano with tunes about, well, relationships ‘n stuff.

In a weird way, Joan was the only band playing the Brooklyn Vegan show that day that seemed like it would actually be listened to by Brooklyn vegans.

There’s something about Celebration’s Katrina Ford… It’s not that the other members of the band aren’t super-talented (they are), or that the music doesn’t rock with an old-style multi-instrumental exuberance (it does), or that the new album isn’t pretty darn good (it is – we reviewed it). It’s just… she’s just got something, and it’s fascinating to watch.

Maybe we wouldn’t particularly notice if she was standing next in line at Whole Foods. But when she’s on stage, something just clicks. An excited energy shines off her, and it pours off the stage in warm washes of something-ness.

Despite playing ridiculously late (blame Death Set and the Meat Puppets), and a sound check from hell, Celebration banged out their allotted space of musical joy with wild abandon, playing a bunch of songs off The Modern Tribe.

Yes there’s an Asian female singer in Mixel Pixel, and no, the band doesn't sound like Deerhoof. Really! If anything, they have a bit of the youthful abandon of The Moldy Peaches, though far more hip and updated into a jumpy electro-pop with a dash of Dan Deacon. They played the Pianos show backed by video projections and themselves, sometimes with whole stories following the song lyrics, and sometimes just a set of floating, revolving bikinis.

A song like “At The Arcade” definitely deserves the video projection treatment, else there’s no way to visualize a line like “We can watch our heads explode just like a car crash.”

“You’re the kind of girl” also lent well to the video format, and it was hard to decide whether to pay more attention to the screen or the music-makers.

And then there was the team, at noon, drinking vodka sodas and kicking over their own drumset. Maybe still drunk from the show the night before?