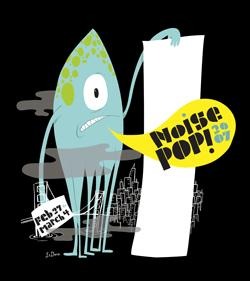 This year's 15th anniversary is poised to be the coolest yet, hands down. True to its spirit of championing independent music, art ,and culture to a wider audience, Noise Pop will kick off on Tuesday February 27 with a FREE Opening Night Event that has an amazing line-up of art & entertainment (details to be announced next week). The festival will then shift into high gear for the remainder of the week with a line up that includes such once-in-a-life-time moments as SEBADOH performing with their original band members, ROKY ERICKSON of 13 Floor Elevators' playing his first Bay Area show in 25 years, and CAKE doing a special intimate performance for badge holders and friends on the closing night of the festival. Noise Pop alums THE DONNAS also return for a special show at The Bottom Of The Hill for
first time since 1998.

It's a banner year for the Noise Pop Film Festival, bringing a whopping 10 events to 5 venues with faraway films from New Zealand, Nashville and New York to music videos shot in 10 hours in San Francisco. As always, never-before-seen world premiere films with an undeniably DIY rock 'n' rollappeal will be screened.

WHO IS HARRY NILSSON (And Why Is Everybody Talkin' At Him?) (USA)
Starring Harry Nilsson, one of the best songwriters of his time, according to peers like Brian Wilson and Randy Newman. Writer/Director John Scheinfeld present at screening.

YOU’RE GONNA MISS ME (A Documentary About Roky Erickson, USA)
Award-winning documentary by Keven McAlester who says, “I started out thinking I was making One Flew Over the Cuckoo's Nest. But I ended up with something more like “Being There.” Director Keven McAlester and RokyErickson present at screening.

Noise Pop and FREEDM, in conjunction with McSweeney's and Wholphin Present:
A NIGHT OF INSTANT CALM
A soothing evening of of short films, readings, and foofaraw! Hilarious readings from a few of McSweeney's best –Evany Thomas, Sal Plascencia, Eric Ruderman, Gary Hoffman and Wells Tower and short films from the DVD Magazine WHOLPHIN.

DANGEROUS HIGHWAY (USA)
Eddie Hinton's cadre of fans know what the world is about to find out; Eddie Hinton may be the greatest unknown musician you've never heard.