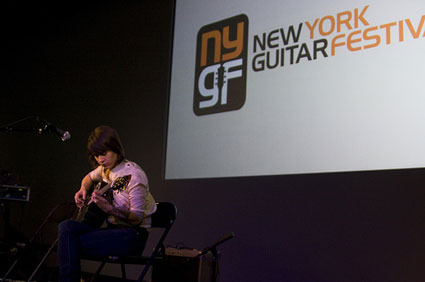 [Above: photo by Jason Bergman]

Diminutive guitar goddess Kaki King debuted some new songs at Sunday’s Apple in-store but the biggest news wasn’t on the strings, it was on her face. Or, rather, not on her face. It seems our Kaki has finally abandoned the rest of us four-eyed losers, dropping four grand on that LASIK eye surgery stuff, and is now spectacle-free. This was her first appearance since last week’s operation and so far she claims she’s seeing 20/20 with just a little light sensitivity. Which is considerable, since the nurse told her that they don’t usually get people as blind as she was.

Oh well, we all have to grow up sometime.

Anyway. The new tunes promise that the next album will be slightly heavier than Until We Felt Red, which, though lovely, was a bit snoozy. The trend towards more instrumentation is also continuing, so expect a string quartet or two. Success hasn’t tainted her verve much, even though since Red she’s been on two major soundtracks and most recently played with Dave Grohl (and will be sitting in on the Foo Fighters’ Madison Square Garden show).

At the in-store she also played a lovely new ballad which seems to be called “Love Stones”, sounding a little Foo Fighters-ish herself. “I know I know, none of you care about the Foo Fighters. They put on a great live show. The man screams his was through the whole thing…”

Also played was a Morrissey cover and some new takes on her old tracks. She still has a tendency to do a little improvising before she starts proper, the musical equivalent of clearing your throat really loudly. But watching her hunched over a slide guitar like a DJ or slapping her Ovation like a bad kitten, you start to realize just how much she can do with her axe. The only person I can think of who can get nearly that many sounds out of one instrument is Owen Pallet.

Come to think of it, a Pallet/King duet would be like a match made in gay heaven.