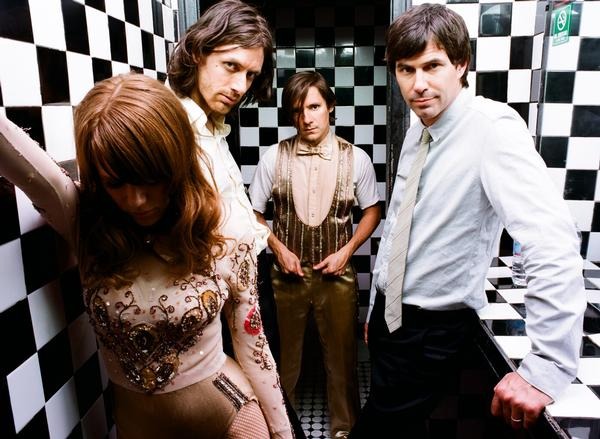 Long ago, Rilo Kiley left the Omaha where they went “to work and exploit the booming music scene and humility” and returned to LA. It's the hometown where front woman Jenny Lewis and band mate Blake Sennett grew up as child actors. (Troop Beverly Hills, The Wizard and Salute Your Shorts, Boy Meets World, respectively). Re-situated amidst their hometown glitz, their head nod towards indie cred has become noticeably less emphatic. Since putting out work on their own imprint Brute/Beaute Records via Warner, they've moved entirely into the major camp since 2005, with their new LP, The Moneymaker, coming out on Warner August 21. Beyond the requisite layer of “silkiness” and/or “pop sheen” their past recordings already started accruing circa The Execution of All Things, the band seems to hit at the same well-worn tricks, particularly in the addictive title-track single. Check out their MySpace page.

The band will tour through North America in September and October, including a recently added date at Musicfest NW in Portland on September 7.

PrevPreviousMaps hit US in September
NextParts and Labor down a drummer, againNext