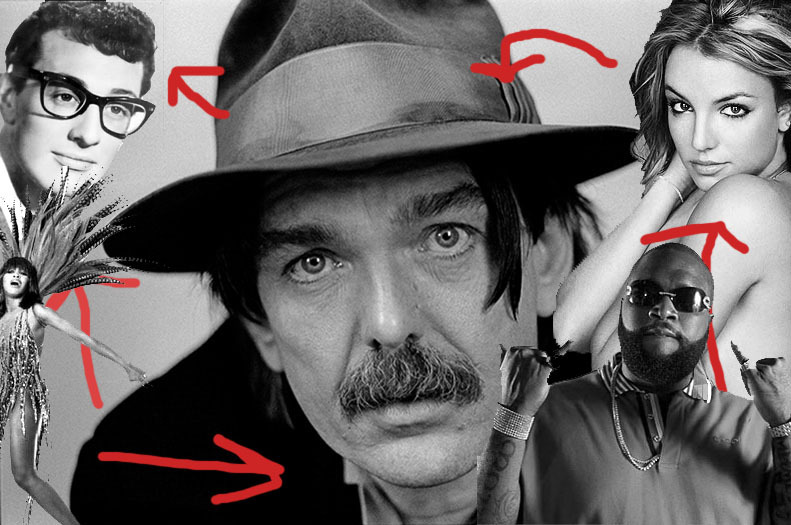 Damn, someone doesn't like N' Sync. What's your problem with R&B for 12 year-old white girls? Someone's got to pop their cherry, and if it's gotta be Lance Bass' thick, throbbing vocal chords, then so be it. For the three of you who don't already know the deal, Six Degrees of Beefheart is our weekly contest that aims to connect two artists within six degrees. There are no rules, only commitments. (Scroll to the bottom for next week's Six Degrees of Beefheart challenge and email your answers to info at imposemagazine dot com for your chance to win bad ass prizes.)

1. Gloria Estefan teamed with 90s gay rights activists 'N Sync for “Music of the Heart”, a single for the 1999 movie of the same name, with a video directed by Nigel Dick, which is only mentioned here because it's the gayest name I've ever heard.

Timberlake modeled himself after David Bowie and Prince, and describes “SexyBack” as Bowie and David Byrne covering James Brown's “Sex Machine.” “That's the closest I could come,” he said. “That's all of my influences for that song.”

4. Unfortunately for Timby, David Bowie has of late given props not to Timberlake, but to Arcade Fire, selecting them, for instance, as headliners for last summer's High Line Festival.

5. Arcade Fire are on Merge records, like Dan Bejar.

6. Dan Bejar collaborated with Spencer Krug under the name Swan Lake, that gayest of monikers.

1. Ozzy Osbourne was the lead singer of Black Sabbath

3. 1972 was also the year that Don MacLean released “American Pie”

4. “American Pie” is a tribute to Buddy Holly's death, the day Holly, Ritchie Valens, and J.P. Richardson Jr. died in a plane crash.

Cool. 1972 was also the year Liam Gallagher was born into this cruel world. Maybe there's more of a connection between that Spawn of Satan and Ozzy than some tribute band wedding song we've never heard of, but we accept.

2. Lily Allen was up for Best New Artist in the MTV Video Music Awards this year and lost.

5. Common was up for three awards that year, including Best Hip Hop Video… he lost to The Black Eyed Peas' “My Humps.”

6. To make matters worse for Common, Allen appeared in a spacesuit for the video, but still has not received an MTV Moonman… personally, I would not mind seeing them all strapped to a rocket headed for Mars.

1. Aerosmith collaborated tragically with Run DMC for 1986's remake of “Walk This Way”, a nihilistic rendering of hip hop dragged kicking and screaming to the suburbs for a high school minstrel show that had something to do with that funny way black people dance. Exhume exhibit A:

3. Miles Davis said this in his autobiography:

It was with Sly Stone and James Brown in mind that I went into the studio in June 1972 to record On the Corner. During that time everyone was dressing kind of ‘out street,’ you know, platform shoes that were yellow, and electric yellow at that; handkerchiefs around the neck, headbands, rawhide vests, and so on. Black women were wearing them real tight dresses that had their big butts sticking way out in the back. Everyone was listening to Sly and James Brown and trying at the same time to be cool like me. I was my own model, with a litllte bit of Sly and James Brown and the Last Poets.

4. Miles Davis used Herbie Hancock on most of his recordings through the 60s, including E.S.P. and Bitches Brew.

We always thought “Walk This Way” was about fucking under aged girls. Learn something new everyday.

[Email info at imposemagazine dot com to submit your Six Degrees of Beefheart before noon of next Friday.]