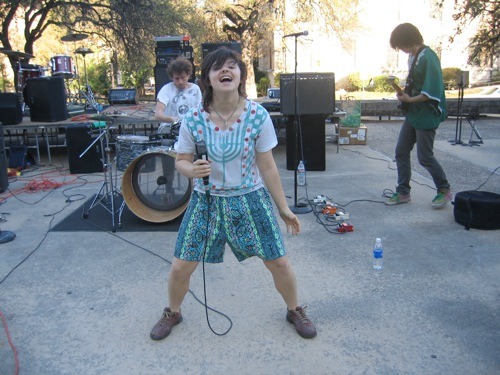 The last day of the festival opened with an SG interview with British Sea Power. Seeing as they’re all about England’s history what with their cricket outfits and imperialistic name, I asked them their opinion on Mercantilism. They looked at me with blank stares, then went off as if Mercantilism remains a hot button issue to this day.

Next, my friend Erin and I cabbed it way the hell out of town to see her friend's band, Barrio Tiger, play on the patio in back of Electra. I’m not going to comment on the music because they are nice guys and nowhere near popularity. I will, however, comment on how you should not sit down on a metal in the sun while wearing a short dress. Ow.

After stopping by Bouldin Creek Coffee House for a quick brunch with Erin and my old friend Adam, aka Ladyfingers, I headed over to the Impose party at UT. I arrived in time for Ponytail.

After that, I interviewed O'Death twice in a row—first for Suicidegirls in a semi-formal fashion, then for Impose while joints were smoked in the RV. Bassist Newman told us pleasant stories about how he used to live across the street from Dan Deacon at SUNY Purchase, and I inhaled so much good cheer I decided to take a little catnap in the back. I have always dreamed of owning a portable nap room that follows me wherever I go, and this vehicle has made it a glorious reality.

I emerged upon hearing the first sweet strains of O'Death’s banjo, and though I felt like I should be devoting my time to bands that don’t play five shows a week back in Brooklyn, they were better than the vast majority of the crap I saw while trying to “discover” the next big thing. It was bizarre to see an O'Death show without tons of rowdy fans of various subcultures thrashing about, but I will take my O'Death however it comes.

Next, the Dodos played sweet, crooning acoustic music that made me want to take another nap. But I did not! Instead, I stopped by the hotel to get gussied up for my last night on the town, then hustled over to the Indie 103 showcase to meet up with Erin. This was not my first choice of places to spend the night, but Indie 103 hosts the Suicidegirls Radio Show and we needed to cover it at least a little bit. It was also nice to hang with the lovely Austin SG’s that had turned out for the event. Though I love my male traveling companions, it was nice to sit down for a second and have a couple of drinks with the girls. It also didn’t hurt that a Place to Bury Strangers was playing. A band I can see any time, but a great one nonetheless. Loud, trippy and evil. And they look like such normal guys.

Instead, I let the Airborne Toxic Event be my anti-drug. Their name is from one of my favorite books of all time, so I’m glad they didn’t ruin it by sucking. Their heartbreaking pop lies somewhere within the emotional landscape of the Cure while managing not to be too 80s about it. The singer reminded me of a smarter version of Julian Casablancas, or maybe Hamilton of the Walkmen but less raspy. Pounding keys and the occasional violin hook filled out the sound. Erin and I danced like giddy schoolgirls at a Ben Kweller show and cheered despite our increasingly hoarse throats. Rather than the postmodern existential malaise the band’s name might suggest, I left feeling like I’d just kissed a boy for the first time. Note to bands: try to make people feel this.

After stopping by the miraculously still open (and modernistically named) Wiki Wiki Teriyaki for some restorative miso soup, I decided to brave the Vice after party cluster fuck. Earlier in the day, Katy from Vivian Girls had remarked to me that South by is “like summer camp for bands.” If that’s true, then the Vice party was the last night of camp when everyone stays up all night and tries to sneak off into the woods to make out with each other. Every friend and acquaintance I’d greeted in the street all week was there for my schmoozing pleasure, and free beer, tequila and Sparks (beware) sweetened the deal.

[If Dark Meat plays and no one can remember, did they play at all?]

The warren of dimly lit rooms comprising the V.I.P. section held even more hedonistic delights. My friends at Vice take fun pretty seriously, and they worked their butts off to make sure the party went off hard. Dark Meat was pretty good, too, from what I can remember. It’s three days later and my head is just clearing. Another week on the road should absorb the come down nicely. There’s a reason this thing only happens once a year.