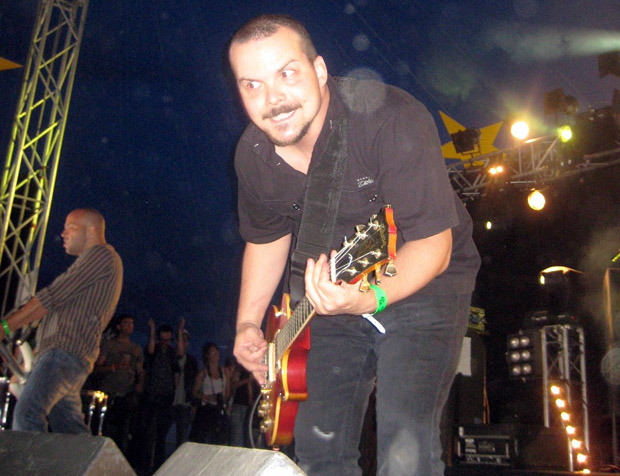 Along their cosmic ride with Japanese pysch-metal purveyors Boris, the boys in Torche summoned the gods of metal and rode into the night with new jams from “Songs for Singles”. Psychotic Reactions had a little bit of time to chit-chat with Steve Brooks, the lead vocalist and low-note bending mastermind behind the stoner-pop sensations.

What was is like touring with Coheed and Cambria? (Quite the odd combo.)

Steve Brooks: Yeah, we had fun on that tour, but that was not a good tour. We’re not bridging any gaps in that scene! Some of those tours, you do it for exposure, but most of the crowd doesnt even like you before you play a note. It just seemed like that. Some of those scenes, we’re just a basic band – we’re not doing anything super new we’re just kind of doing what we do. I listen to all kinds of stuff. I don’t really listen to metal other than the 80s, and thats probably what inspires me. I don’t listen to music at home, I listen to music in the car. I love 70s disco and 80s metal and thrash. I love 80s music – Go Gos and Big Country. (The pop element of Torche) seems natural to me.

I know the split with Boris has been out for quite some time, but how did that come about?

Torche: Well since we toured with them and everything we became friends and that just kind of came up. We were working with Hydra Head, so it was originally Hydra Head then Daymare that talked about it – Hydra Head would take care of our side financially, and Daymare Boris’

Living in Miami, what was it like playing heavy music, without the demand of a place like New York?

I’ve been doing this stuff for so long, that when I first started there was no scene for it. I just did because I loved to do it. We had fun doing it at first. This band took it further than that. It’s growing; I think we’re in limbo sometimes – we confuse people because some of what we do is really heavy and some of it's not. S

What was the motivation behind doing the Floor reunion dates?

Money. The fact that when Floor actually existed we made nothing. We would play and nobody would come to the shows. Then when we broke up people kept saying, will you play this song when playing with Torche. There was a demand for it then Robotic Empire did the box set, then we thought it would be fun to do a reunion. We did the four reunion shows and it was kind of like one of those things where alot of people hadnt heard the earlier stuff. There were promoters offering stuff we couldn’t refuse, so we decided to do a few more gigs. We were doing surprise shows in small spaces. We would just set up little warehouse DIY shows and the place would be packed. Tony from Municipal Waste set up a show on a days notice and it was awesome and packed. Before we left we did one in Central Florida that was supposed to be secret and the word leaked. We end up getting on tours that are bigger, and when you work with a booking agent you are under contract, so when we want to do smaller spaces, we can. Those shows are fun, they’re the best.

How was the writing method for Songs for Singles different from Meanderthal?

The music was simple as hell. But it was busier than the other stuff, so for me to put down vocals that everybody liked — that was the problem I faced. I don’t know where my head was, but it worked out. I had to go and re-record a lot of the songs because certain things weren’t working. It took a lot longer just because of the vocals.