Tinnitus Thirteen Years On: Portraits Of Past Reunite 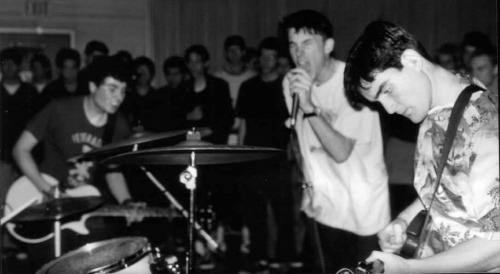 Back to tickle the tinnitus after more than ten years, the SF Bay area hardcore enfants terrible Portraits Of Past are midway through their short 2008 reunion tour.

Having already knocked out two dates on the first and second of this month in San Francisco and Berkeley, they'll be bringing the act eastward to our metropolitan cradle of filth and hustle for two shows to rescue us New Yorkers from the very last dog days of summer, when the sun has baked the garbage and dog pee on the sidewalk into that urban bouquet we know so well. If we know what is good for us we will welcome our screaming guitar overlords and accept their vented spleen with joy in our hearts.

Portraits Of Past label Ebullition released the extant recordings of the band on June 23, thirteen years after the band's short but successful stint as a corporate entity. The candle that burns twice as bright burns half as long, so I guess that means that if this band were just OK they would have been around for three years or so, instead of the vague '94-95 timeframe listed in their band bio.

Vocalist Rob Pettersen, speaking to Impose via the band's Myspace, told us that the band currently has no new releases planned, however they did play a new song at both of their recent California shows.

Quoth Rob (and I imagine him just really letting us have it this at the top of his lungs):

We are not sure if other songs will be written or how/if we will release it/them. Nothing is ruled out, however… Our guitarist Rex (Shelverton, of Bellavista and the VUE -ed.) does a lot of producing and the new song most likely will be recorded by him when our drummer is back in SF. I will also need to find time to make it out there to record vocals.”

Nothing's ruled out? With a comment like that, is it possible that Portraits Of Past are painting the possibility of a future tinted rosy by a release schedule? Well, if so, I hope they do it before I go entirely deaf. Meanwhile, you can pick up Discography at Interpunk.

Portraits Of Past, “KQED Equals Volvo”

The Faint, VUE, Camera Obscura, “People on the Stairs”

There are as of now two September dates listed on the band's Last.fm page that the band confirmed they have flagged for removal as apocryphal.

Portraits of Past Discography tracklisting: