Watch: Pandering for hip hop votes through the ages 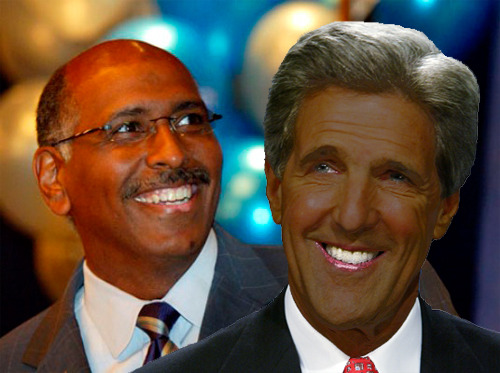 How about the balls on DL on this? He goes right in the face of Michael Steele and tells him he has his job simply as a response to Obama (which he does). Steele seems well-intentioned as he runs down a GOP-mandated “to do” list with his folksy 90's-era hip hop slang, hoping somehow to nab some Obama-loving voters. Just watch: he says “ain't”, tells us to “bet on black” and even recites “hip hop is a culture!”

Watching this kind of stuff really makes it clear that politicians are placing way too much importance on hip hop now a days. Are senators really starting to believe that the youth gives a shit who is in their top five lists, or which one of Lil' Wayne's albums are their favorite? This isn't an isolated incident, either. Look at this awful video of the even more awful Mike Huckabee interviewing Russell Simmons on Fox News earlier this week and notice the sudden respect the GOP has for hip hop.

I love how Mike Huckabee decides to lecture Russell fucking Simmons, founder of Def Jam and owner of everyone in the rap industry, about the fundamentals of hip hop! Thanks for the insight, Mike, never thought of hip hop as a culture before, because this is 1978, right? And I haven't heard of rap music before, and your reporting is right on time.

But it isn't just the Republicans who are guilty of pandering to the rap crowd. In case you forgot about this, look at a quote from an MTV interview with John Kerry that was conducted during his presidential campaign in 2004:

I'm fascinated by rap and by hip-hop. I think there's a lot of poetry in it. There's a lot of anger, a lot of social energy in it. And I think you'd better listen to it pretty carefully, 'cause it's important.

He was telling the truth, though, because I totally remember seeing him at Fat Beats a few years ago buying The Cold Vein on vinyl. Anyway, he lost to a guy who doesn't listen to any black music, so I suppose back then hip hop cred didn't matter as much in politics as it apparently does now.

This must be the worst for Chuck D, though, man. He has to sit there during these shows, listening to Republicans like Mike Steele as they try to school him on the history of rap, like he wasn't there creating it, and make it seem like the GOP is the party to fight the machine that is American goverment. I can just picture him collapsing in his dressing room after the show, crying, “I never asked for this! What have I done?!”, because, whether it's for better or worse, the Republican party is officially using his own art form to gather votes for Palin/Steele 2012; and that's just heartbreaking. Hope he's getting paid.