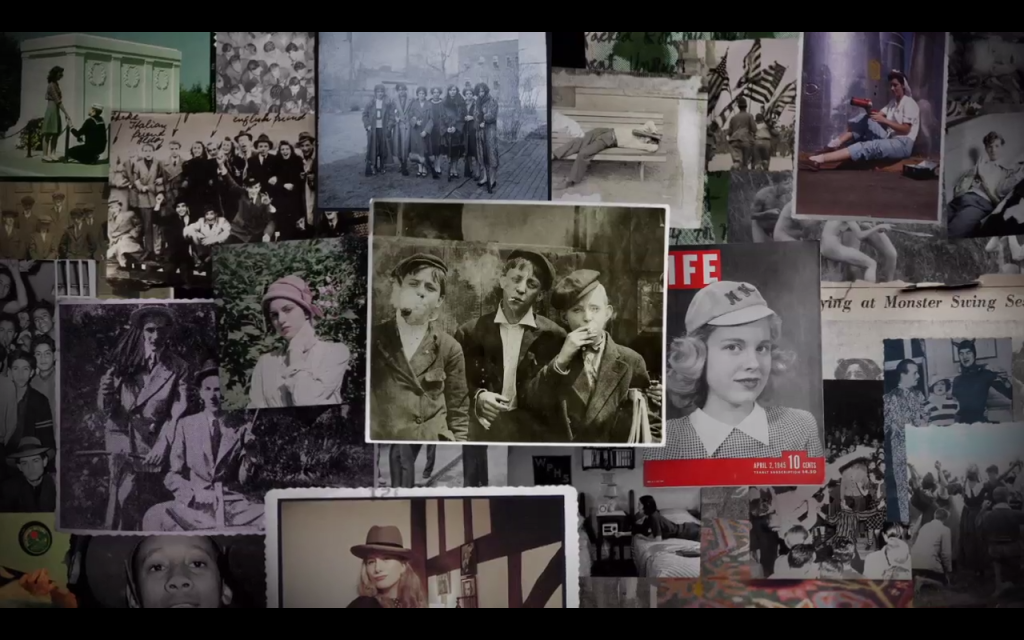 Teenage is Matt wolf’s blend of archival footage and reenactments based on “Punk,” a book by Jon Savage, and scored with original music by Bradford Cox. Wolf describes the movie as a “living collage,” which is what Savage called the phenomenon of kids from 1970s England taking thrift clothes from previous youth cultures and cutting them up to reassemble with safety pins. Wolf found this to be a fascinating gesture in terms of a punk tactic. For the film, he went through a careful process of selecting images, quotes and writings from teens of the era and pieced them together to tell a story about social control, youth seeking freedom and youth leading youth.

The Boy Scouts, German nature kids, Jitterbuggers, Flappers, Bright Young Things, Victory Girls, and Swing Kids are some of the youth movements captured. These are the teenagers, the conception of which the film tries to explore post war. Before, they were children who immediately lost their youth: “twelve years old and I’d be off to work in a factory.” Working as much as 74 hours a week in there they felt like prisoners and slaves. They felt free the in the streets but soon they were seen as social problems, as hooligans. It was decided that the children needed to be protected so the government banned child labor and the kids started going to school. There was a new idea of adolescence. Boy Scouts formed in Europe and came to America. Boys were trained to be loyal to who they served, to be self-reliant and to be patriotic: “we were primed for war.”

The four main characters that carry the film's narrative forward are chosen mostly on the basis of the availability of original content such as diary entries because Wolf wanted to project the voice of the youth, he wanted everything to be real as they felt it. In the film, you hear first hand accounts over the reel. There is footage of kids filmed by the kids at parties, photographs they took of each other, art films they made with one another. Otherwise, the problem would be that during those stages of youth culture’s development, almost every recording of teenagers was done by adults; it was the adult’s point of view. And so, to show the dialectic between the adult perspective and the teenage perspective the use of teenagers’ home movies, diaries, and autobiographies plays a crucial role.

What all of these youth movements have in common is rebellion, be it against parents at home, or against societal norms and expectations. But there is a contrast between people who were acting for change, and people who weren’t, such as that between Tommie Scheel and Melita Maschmann, both from Germany during Hitler’s reign.

The movie begins with ambitious thoughts and hopeful predictions of the young generation making a big splash of change, and of course, music is a recurring subject early in: “There’s always a change going on, you never know what’s going to happen next, you never know what new clothes you’re going to have, you never know what the new record’s gonna be,” says a young African American girl. Two boys dream of moving to the Wild West, and one’s only question is what the other will do with all the records in his room— he’ll take them.

The overall concern of the collage is how the “teenage” came to be, what is to become of them, and what it is that they are saying. They themselves are curious of who will decide their future. The director himself only delves deep into swing music as far as the correlation between music and youth goes. “Jitterbugs were changing the mood,” “swing was the voice of youth, the sounds of freedom.” American culture spread, especially through American music that the soldiers brought home to Europe after the war.

Duke Ellington was Hitler’s enemy but Melita Maschmann was not. Being confined to stay home with her mother's expectations of her to be “unquestioning and obedient” made her feel like the maids so she joined Hitler’s Youth and became a March Violet. She thrived in a world created by him with weekly tests and competitions amongst friends, obstacle races, camping trips, tug of wars. All full of false illusions of freedom and purpose, of being allowed to be a part of a community that “embraced the youth of the whole nation.” She was aware that they were at the center of the government’s plan, “If you didn’t like it, there was no escape,” she says. Melita believed in Germany’s “superior moral position” and went on to become a press officer when the war started. She lost her Jewish friends, “everything I was or had been was now absorbed into the whole.”

But there were the Hamburg Swings. “Tommie Scheel fell in love with Swing…it was a new youth language and Nazis weren’t allowed.” He and his friends hung out in their parents’ house, they listened to records his friend brought from New York, and they danced. They had no manifesto yet their mere existence was a risk to the regime. Swing, art and social dancing were banned but Tommie still wore British suits. Uniforms were the people's identity at the time so if you weren’t in one, they knew who you were and what you believed in: “it was important not to look like faithful German younglings.”

Teenage is currently screening across America and has also been scheduled to play at the Tribeca Film Festival in New York and Sled Island Festival in California.

PrevPreviousRecord Store Day: A Staff List of Hits & Bullshit
NextPunitive Embers: An interview with Jesse Hlebo on art and the InternetNext