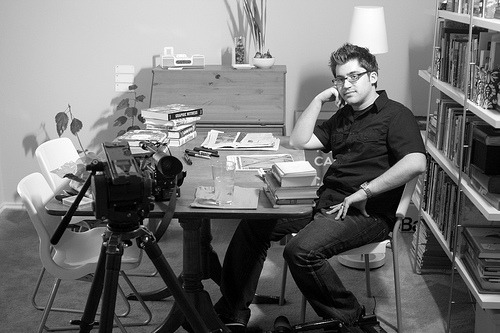 Austin Kleon's idea of “blacking out” newspapers was born on his daily commute to work, where he'd read ones discarded on the train. He soon began blacking out most of the print to make poems out of what was left. Poetry by subtraction. Austin still reads newspapers, just not for the news. He's caught on (or created) a cultural zeitgeist of sorts, something that's all his own but accessible for others to try. His recent book of collected poems is Newspaper Blackout, out now from Harper Perennial. He regularly posts his new creations on his blog.

01 Michael G. Powell’s article “Blacked Out: Our cultural romance with redacted documents” in the June issue of The Believer. I actually drove to BookPeople here in Austin, TX and bought a copy of the print magazine for $8, just so I could read this. There’s a terrific bombshell Powell drops towards the end: Government redactors don’t actually use black markers! They use red or brown markers, and then run the documents through a high contrast photocopier, so they can keep track of what they’ve redacted. You would pity the level of excitement in my life to know how excited this information made me.

02 Interview with Jason Segel, GQ magazine. Jason Segel just seems like a guy you want to have a beer with. So many great bits in this piece, like how he finally realized the Dracula musical featured in Forgetting Sarah Marshall was a comedy, and not a drama, and his terrific line about hard work vs. talent: “I'm willing to be bad for as long as it takes, until I'm good.”

03 The artist Tony Fitzpatrick’s blog. Fitzpatrick makes these fantastic collages that I got to see in person at a gallery here in Austin called Yard Dog, but what makes his blog so fascinating is the lifetime of stories he has that go along with the pieces. Usually listening to artists talk about their work is the ultimate snooze, but Fitzpatrick is about as far from boring as you can get. Like Roger Ebert, he’s a great blogger because he doesn’t understand (or give a fuck) that you’re supposed to keep your blog posts short and sweet, all tied up so that people can quote them on Facebook or whatever. You have to set aside some time to read them, and that’s why they’re great. The kinds of blogs Instapaper was made for.

04 @TommyHowells on Twitter. Imagine being such a good teacher that one of your students collects a book-length manuscript of your quotes from the classroom and self-publishes it. The quotes are so good that the son of that student decides to create a Twitter feed out of them. Little fortune cookie gems, like: “Institution: The echo of an inspiration no longer heard.” Or: “Water reminds us that acreage is not all there is to the human experience.” Backstory here.

05 Okay, I’ll end with a book – a novel, and a very funny one. After having it recommended to me for years, I finally got around to reading Kingsley Amis’s Lucky Jim. It not only contains the best description of bad academic writing (“its funereal parade of yawn-enforcing facts, the pseudo-light it threw upon non-problems”) but
also the best description of a hangover: “He lay sprawled, too wicked to move, spewed up like a broken spider crab on the tarry shingle of the
morning….His mouth had been used as a latrine by some small creature of the night, and then as its mausoleum.” Should be required reading for any poor soul considering a career in academia.