Huck, Jim is not yr nigger 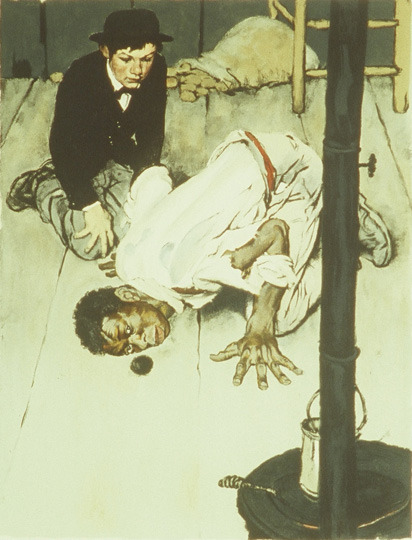 Feel like the apocalypse is nearer with the news that Twain's Huckleberry Finn will be edited for those socially unacceptable words that used to be socially acceptable, lest anyone forget. And that's the problem with this new Southern edition of Huckleberry Finn: we might forget, we keep forgetting.

According to Publisher's Weekly, the news is: Huckleberry Finn is being edited out for this word (check #2) & that word.

Twain was just emulating the culture around him. You know, just like I don't like the phrase 'alt-bro' but it shows a period, a time and place of the late '00s and '10. It may go outta style, but that doesn't mean it should be scrubbed from the history of the interwebs.

The publisher, NewSouth, says teachers feel like they can't teach the books in school with those words. All 219 times of its usage.

“After a number of talks, I was sought out by local teachers, and to a
person they said we would love to teach this novel, and Huckleberry
Finn, but we feel we can't do it anymore. In the new classroom, it's
really not acceptable.”

The problem is the 'new classroom' because it's pretty loaded. What I think he means is that in the 'old classroom' racial slurs weren't discussed for meaning or intent–they were used as derogatory terms without any critical context. But now in the 'new classroom' the words can't be used at all.

So where was the 'middle classroom' where the meaning and the semantics and the context and the intent were actually discussed? I'm not sure that classroom ever existed and probably not in Alabama where these new editions are set to be released. Instead this 'middle classroom' was skipped over.

Granted, maybe discussing or focusing on these slurs detracts from the 'meaning' of Twain, but whose to say the cultural meaning of Twain can't change?

Gribben's defense of the 'general reader' sounds ridiculous, because it is probably the critical thinking skills demanded in discussion of these type of words in Twain's context that the general reader needs most.

But does Gribben really know the general reader? The general reader in this case (i.e. high school? middle school student?) hears one of these so-called offensive words in hundreds of record albums, probably more than Gribben actually hears the word himself. Maybe a little deconstruction would do those general readers some good–discuss some new contexts, some new meanings, some new evolutions of the word. Because in all likelihood the general reader has heard this word a time or two.