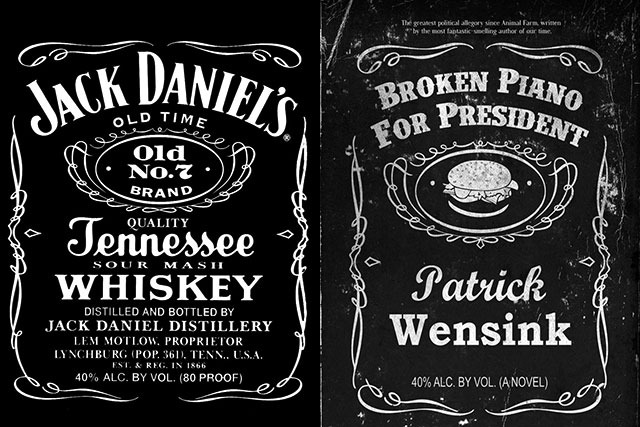 Louisville author Patrick Wensink is getting unprecedented attention from all sides. His novel, Broken Piano for President, features a cover design based of the iconic label for middle-shelf bourbon Jack Daniel's. It's not a total rip-off – it also features a hamburger – but it was enough to get the attention of JD's lawyers. Surprisingly, the Jack Daniels corporation is being very cool, and is treating Wensink with respect, but maybe they didn't count on the book shooting into the top ten on Amazon.

Broken Piano for President is the story of a blackout drunk (hence the inspiration for the cover), an addictive burger recipe (also, see cover), a fast food arms race, and “the world's worst rock band.” It just came out from Lazy Fascist Press, with an audio book from Deathbomb Arc featuring sound by, among others, Lightning Bolt's Brian Chippendale and Foot Village's Brian Miller. It's weird and surprising and energetic in the best way. I caught up with Wensink to ask him a few questions about Broken Piano, viral success, book covers, the law, and pets.

What made you decide on this cover? Did you consider the reaction from Jack Daniels as a possible outcome?

Something a lot of people don't know is that writers rarely have any say in their cover art. I did not. My editor at Lazy Fascist works frequently with the talented Australian artist Matthew Revert, and they cooked this up. I only saw it when it was finished.

But, no, legal reaction from Jack Daniel's was the furthest thing from our mind. We are all artists, not lawyers, so we just mistakenly figured it was a parody and everything's fine. Whoops!

The cover is a great play on some of the book's subject material. What do you think a cover can do for a book? Should the images on a book's cover always be linked to the subject matter? Should a cover be provocative?

I don't think a book cover needs to convey the plot, necessarily, but MUST convey what the book is “about.” Which is to say, on a deeper level what's psychically and emotionally going on in this book. A great example would be Delillo's iconic Underworld, which features a steeple and a bird and the Twin Towers back before they symbolized something else entirely. The World Trade Center barely gets a mention in that story, but it symbolizes the apex of the second half of the 20th century, which is the underground river that book floats on.

Provocative, no. But eye catching? Certainly. Lately, I've been a fan of the cover of Jo Nesbo's Snowman and Ben Marcus' Flame Alphabet. Neither are provocative, but both make me ache to read those suckers.

What do you think of Jack Daniels' response to the cover? It's getting a lot of attention for being exceedingly respectful. Do you buy that they're supportive of the arts, or do you think they're just trying not to be the bad guy?

My guess, and it's purely a guess because I don't know much more about the Jack Daniel's legal world than anyone else, is that they are legitimately understanding. They had no way of knowing this story would go viral. They just reacted as they saw fit, which was to be insanely understanding of the situation. I think they saw that we had no malicious intentions and were just parodying their style. Had we been setting up a still and making our own Broken Piano whiskey, that'd be another story. Damn, why didn't I think of that sooner?

Will the cover be changed on its second printing?

The book is actually print on demand, so it'll be available in this Jack-inspired form until we finalize new art, which should be around the end of August.

At this point, would you like to be more involved in the decision of what the new cover will look like? Do you think it should reference this controversy, or is this something you'd just like to move past?

I'm not a visual arts guy. I trust my editor and the designer to come up with something equally terrific, but legal! There is talk of referencing the controversy and some talk of totally finding a new path. Nothing has been decided yet. Either way, I'm sure it'll encapsulate the fun, weird spirit of Broken Piano for President.

Another hard question. I thought we were going to be talking about my preference in house pets.

Absolutely a cover should help entice readers. That's why they have covers. That's why cover art can be such a powerful thing or such a repulsive thing.

Getting someone to read in today's media climate is so tough. Let's face it, Don Draper is a hell of a lot more interesting than I am. So, if someone picks up a book because of the cover, that's such a victory. You can only hope that that person falls in love with the story inside that you've worked so hard on. Me, personally, I spent six years writing Broken Piano for President. So, I'm thrilled at the prospect of someone picking the book up because of the cover or the Jack Daniel's controversy and discovering a book they otherwise wouldn't have.

When the cover changes, does the reader's relationship to the text change?

I think it's very possible that a reader's relationship will change with cover art. Even if they are familiar with the author and subject. Another great example: I recently decided to buy a ton of Stanley Elkin novels and I purposely sought out the new Dalkey Archive reprints, because the covers were so beautiful. I settled for an ugly '80s version of his book, The Franchiser and was bummed. It's at the bottom of the stack, even though the story sounds awesome. Why do I do this? I have no idea. The relationship between literature and aesthetics is unavoidable and Stephen Hawking levels of complex.

The notion of “viral success” is something that has been a problem for a lot of artists in recent years, and is often only tangentially related to the artist's body of work. How do you perceive something “going viral” in relation to your past publishing success? Is it fulfilling in a different way, and do you feel that it provides a new perspective on your writing?

Going viral is totally new for me, obviously. It'd be great if I got all this attention because people said my work makes F. Scott Fitzgerald look like a hillbilly, but I got trademark infringement. I'm not going to argue. It's been an absolute blessing, first, not getting my pants sued off, and secondly having my work find such an audience. Like I said, it's getting my book to people and then it's up to them to like or dislike it. It's out of my hands.

Do you have a desired audience for Broken Piano for President? How did the novel come about? Was it initially conceived as a novel, a story, just an idea floating in space?

The book is certainly not for everyone. I don't deny that. Actually, funny story, in 2007 my agent shopped an early version to publishers and one editor at Viking called it “nauseating”. I actually put the rejection on my website.

One person's nausea is another's bowl of candy, you know? I don't think anything is nauseating in the book. I basically didn't set out with an audience, but aimed to write a book that I would love if I discovered it, because I felt there weren't books that combined my love of dark humor and satire and strong prose styling. I tried my best to do that and I think I came as close to the mark as anyone. The book is full of binge drinking, meth use, noise rock, esoterically structured chapters, corporate espionage and high and low humor.

It came about because I had ideas for three separate books, one about a blackout drunk. One about the world's worst rock band (named Lothario Speedwagon). And one about fast food chains in an arms race of releasing insanely bad-for-you food. I simply decided it'd be fun to mix these three elements into one story and see what happened.

What's next for you, as an author?

Next, I am trying to catch my breath. I just learned TIME magazine is covering the story. Like, that TIME magazine. Not the pocket watch trade mag.

We'll have a nonfiction collection out this fall and I'm finishing up my next novel, which will be out in early 2013.

My favorite pet is my cat, Hoagie.