The End Of Brooklyn 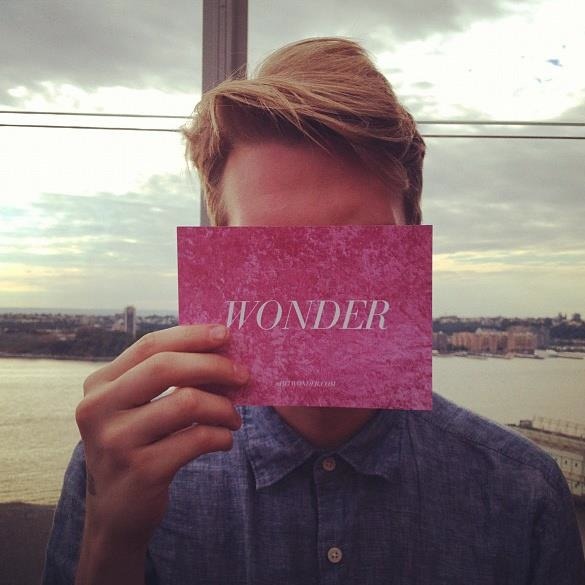 Literature and publishing scenes are often more conservative than you'd think. Publishers make the mistake of thinking that, just because most people don't care about books, devotion to books is somehow a revolutionary act. Devotion, however, is not the only requirement. A publisher must be committed to pushing new ideas and must have an impenetrable aesthetic, in order to be crucial.

Wonder, a new venture from the minds of Ben Fama (poet and former mastermind of the Supermachine journal, press, and series) and Andrew Durbin (poet and former editor of O'Clock Press), seeks to do more than publish. Bound to philosophy, lifestyle and aesthetics as much as they are to language, Wonder's aim is to not take a particular shape. There will be books, but the publishing of a book will not end the conversation. Ideas of queer culture, gossip, Hollywood, new age goth, romanticism, fashion, tumbl-ing, sxting, and fame (along with a bunch of other stuff) surround Wonder, and being the definitive volume on a particular subject is not of interest to them.

I talked to Fama and Durbin about the project. Wonder has been building up to big things all summer, and this fall will see the launch of Mall Witch, which exemplifies the texture of Wonder's thinking. Mall Witch will be a book, a gallery show, a salon, a discussion, and an exploration. As with everything else in the world, there's a Kickstarter, but don't let the saturation of this fundraising method define the press for you. Ink on paper is just the beginning. Make it rain.

They are often missing each other, usually missing an internet connection, and occasionally missing the point altogether. There is certainly a rift, but sometimes a rift can be a good thing – and we don’t know if Wonder will mend it. We don’t really want to. We’re only interested in exploring its edges.

What are some of Wonder's guiding lights? What inspires you?

Wonder's Facebook page reflects so much of your personalities, and goes beyond the traditional check-out-our-new-book or go-to-this-reading that I see from the other publishers I follow. Does Wonder's aesthetic go beyond publishing? Are your aspirations greater than just releasing books?

Wonder began as a series of parties called Crush. We asked people to send us the name of their crush and we in turn invited them to a party in Williamsburg. We did two of those. For the second, we released a short pamphlet titled ♥ This Will End in Tears♥. We’d like to do more social events. We’re probably going to host Crush 3 in the fall, where we hope to declare “the end of Brooklyn.” But we’re ready to move on from those parties and start something new.

Tell me about your first release, Mall Witch. You've been building suspense. What are you doing for the release?

We hope Mall Witch will be a unique book release. From October 29 to November 4, we’re hosting a gallery show at Culturefix on the Lower East Side. We don’t want to say much about what that will be, but it’ll involve the internet. And visual art. And music. And poetry. And film. But it’s only going to happen if we can earn the $. As we tell everyone who meets us, it’ll be the kind of thing you go to every night. Between Paul Legault & Joseph Kaplan, Snowy Wilderness, and us, we’ve put together an amazing week of programming.

What are your plans for upcoming releases?

Other than Mall Witch, we’re releasing a chapbook titled Doe this Fall at Printed Matter in Chelsea. It’s a short book of erotica. In the spring we’re going to release Kate Durbin’s next book, The Fashion Issue. Durbin’s book will be an app for your iPhone or iPad in addition to a limited-run print edition. We want to see if apps are the future of books or not.

How is working on Wonder going to be different from working on your other projects? How is Ben's work with Supermachine going to inform Wonder? How is Andrew's work with O'Clock going to do this?

It’s totally different. We consider our earlier projects more static in their ambitions. Wonder is dexterous, flexible, and movable. We were bound to books and journals and readings before, but with Wonder we feel released from some of the heavier “obligations” of poetry. Whether we continue to focus on books of poems or not doesn’t matter much. As our collaborator Paul Legault puts it in the Kickstarter, we’re interested in adding poetry to the fine arts hashtag, and the way to do that is to think outside the kind of work Supermachine and O’clock did. But that doesn’t mean people like it. We get a lot of comments about how Supermachine and O’clock were better projects. There’s a rumor online that we’re going to do a Supermachine 5, but we don’t want to, not unless someone pays us. O’clock is still around, of course, though Andrew retired earlier in the year after the release of CLOCK 2.

Wonder loves to collaborate with the dead. While working on Mall Witch, we convened with everyone from Frank O’Hara to JonBenét Ramsey.

Your website is shitwonder.com. What is “shit” to you?

We don’t really know what shit is. The idea behind “shitwonder” is reclamation: in one sense, reclamation of a word that means “bad” or “excrement,” but it’s more than that. Shit is wonderful because people so rarely look for it. Shit is the unseen, the refuse, the unwanted. It just happens to them and they regret it or avoid it. Shit is flushed. And it’s wherever people aren’t looking that we find something worth looking at.

PrevPreviousPatrick Wensink v. Jack Daniel's
NextThe Minus Times Turns 20 with No. 30Next