The Word Made Flesh: Literary Tattoos 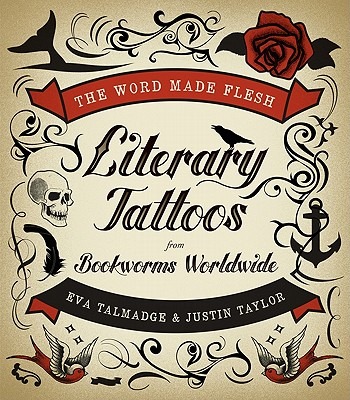 Writers Eva Talmadge and Justin Taylor had a revelation last year, one of those “aha” moments that become a movement. They wanted to chronicle the various tattoos that people get in honor of their favorite book, quotation or novel.

After an initial post on HTML Giant, the entries poured in and Eva and Justin began posting their findings on Tumblr. And like all good Tumblr cliches, they got a deal with Harper Perennial to release them as a book. The result is The Word Made Flesh: Literary Tattoos from Bookworms Worldwide (Harper Perennial, 2010). It's a fascinating pictorial, to see the art but also to understand and learn from the stories of the the proud tattoo recipients. It also features a section on Shelley Jackson's “Skin” project, in which a word from a short story will be “published” on a few thousand different sets of skin.

And in a bit of breaking news, Eva announced yesterday a new book of tattoos for the music oriented.

Eva took a few minutes for some questions…

How'd the idea to document these tattoos spring up? It seems so obvious to do,
yet no one had done it.

Justin and I came up with the idea in
the summer of 2009 after a few people we knew, including a couple of
roommates (one of mine, one of his) showed up with literary tattoos.
We'd been seeing a lot of text tattoos around Brooklyn and on the
L-train that summer, and thought it might be something of a trend. But
we really had no idea how big a trend it was until we put our first call
for submissions on the internet (on HTMLGiant.com) and the pictures
started flooding in.

Did you or Justin personally have any literary tattoos?

I have multiple tattoos; Justin has none. None of mine were literary
(almost all music-related, in fact), but as a “publicity stunt” for the
book I did in fact get a literary tattoo, which you can see for
yourself on our trailer:

Some of the ones documented were more elaborate than others… but did any of
the submissions surprise you guys?

With tattoos, nothing surprises me. I've been around enough tattoo shops and tattooed people (and these days, blogs, like fuckyeahtattoos.tumblr.com)
to feel like I've seen it all. Though seeing not one but two John
Berryman tattoos in our inbox was a nice surprise, as was discovering
Donald Barthelme's daughter, Katherine Barthelme, has a tribute to her
father on her forearm.

Were you surprised at the popularity of any of the themes or authors chosen to
be tattooed on somebody's body?

Before we started the book, we knew from googling literary tattoos and visiting sites like www.contrariwise.org
that Kurt Vonnegut is hugely popular in tattoo shops, as is e.e.
cummings, Shakespeare, Harry Potter, and Sylvia Plath. (You can fill an
entire book twice-over with Harry Potter tattoos; we chose to run just a
few.) Finding not one but two portraits of Walt Whitman was a nice
surprise, and Krista Grinovich's full-sleeve dedication to Kafka bowled
us over with its awesomeness.

PrevPreviousAnd the Bad Sex winner is…
NextGoogle ebooks are here. Except for Kindle users.Next