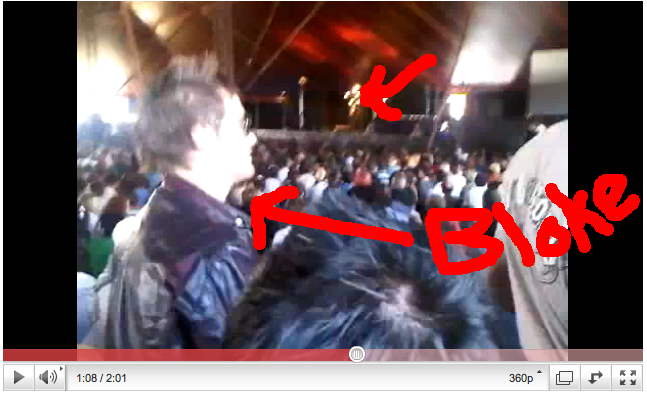 Watch as American comedian Neil Hamburger shouts in odd tongues and the baffled Brit devolve into the traditional “You're Shit / I don't know who you are” chant, which seems to be a sort of crisis of conscience in itself, since if he is Shit, then don't they indeed know that to be who he is? C'mon fancy people, get classy.

This video was shot during Neil Hamburger's stand-in set at the Reading Festival at the end of August. If you visit the youtube spot for it, you can read the charming description, which goes:

Unknown comedian Neil Hamburg [sic] stands in for Kevin Bridges. As you can tell, he's not very good and gets booed off stage

If you like Shit as much as the gel-'n'-shades combo standing in a leather jacket in the foreground of this classic, yet-to-really-go-very-viral video, you can still get yourself some Hamburger somewhere along his never-ending tour:

PrevPreviousZola Jesus at The Roxy, Edinburgh
NextIf I owned a Wavves weed grinder…Next