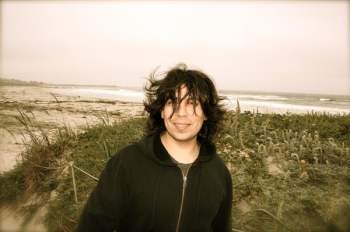 Jimmy
Turturici is the Monterey Peninsula’s campfire spark of musical
wizardry. One
generation away from the influential Monterey Pop Festival of 1967, he
carries
on those storied traditions with a star voyager’s futuristic eye.

A
fabled
producer, arranger, front-man, composer, musician, performing under
various titles
with various side projects; Turturici has remained an influential and somewhat
elusive
figure of the Monterey music scene. Over the course of the millennium’s
first
decade, he produced music for eclectic evening programming at Pacific
Grove’s
KAZU 90.3 FM, back when the old station used to believe in real local
radio
shows and music.

He was
once courted by Master P’s No Limit label (which we have more on below) and has provided scores of
bands from
the peninsula with sound engineering, guitar work and a bevy of effects
treatments. Jimmy continues his solo efforts along with his project, The
Slowest Ride (fifteen years after shoegaze, five years before chillwave)
and creative
production duties for the Peninsula’s electro-cult oddity, Hot Dogs in
the Sun.
He recently worked on a film soundtrack for an indie flick in
the
works called the The Monarch of Evening Time. Turturici’s solo work
and
projects go in and out of availability at Vinyl Revolution and Recycled
Records
on Lighthouse Avenue and at most other Monterey record shops. With no
compilation
in existence, I have made a brief introductory mp3 set to toast an
important
and rarely sung tunesmith from California’s great Monterey Coastline:

The Slowest Ride, “Only
Friend”

The
Monterey press heralded the Slowest Ride as the second coming of Hank
Williams
and Nick Drake as an electric folk duo or a more cosmic version of the
band
America. They wowed the sleepy town with a series of sets during the
downtown
Monterey First Night New Year’s celebration in 2005. Comprised of Jimmy
and
longtime buddy and collaborator Johnny Aulenta they continue to cradle
both a lyrical
vulnerability and dedication to a sound beyond trite pigeonholed
comparisons.
This original mix of “Only Friend” presents the group with a low,
four-track
demo fidelity with tape loops and moody vocals.

Turturici on his involvement with Rick Brown and No Limit: “In 1997 I met Rick Brown working at Safeway
and he introduced me to Shandar who was under the same management ofE-40
and Master P of No Limit. Meeting Rick Brown (aka The Stunt), I gave
him a mix of some my musicand
he was like 'Oh man, I want to use that for a hip-hop track.' And that
song became 'Extacy,' but remained an outtake. Shandar was working at
Seahorse Records in Seaside and I produced materials for him too, but
nothing ever materialized with Seahorse. I have kept
in touch with The Stunt and still work on production for Gabfest
in L.A. who
work with artists like DJ Quick, Kool Keith, etc.”

Recorded
for his album Wires for Roots, Jimmy
has been mixing and remixing an electronic dream piece cyclone in a
blizzard of
keyboards, drum machines, more keyboards, overdubs and dramatic overture
motions.
No wonder he wants to make motion picture soundtracks.

Continuing
with the light motif, “Pacific Grove Light” is the first soundtrack leak
from
the upcoming Sundance Film Festival entry The Monarch of Evening
Time. New
wave keyboards give the ambient piece a Blade Runner set in Big
Sur feel.

Soon to
appear on the upcoming Hot Dogs in the Sun debut Activate Lazers;
“Top Cop” is decked out as one of pop radio’s finest.
With satirical lyrics by Johnny Aulenta, this self-infatuated dance tune
lampoons the bullying attitudes that come with the role of a patrol
officer. “I’m
a cop, society’s mop, I keep the streets clean by causing a scene,
‘cause I’m a
top cop and you better stop, when I say get down, I mean to the ground.”
And given
the police state situation in Arizona, Jimmy’s timing was impeccable
with this
one.