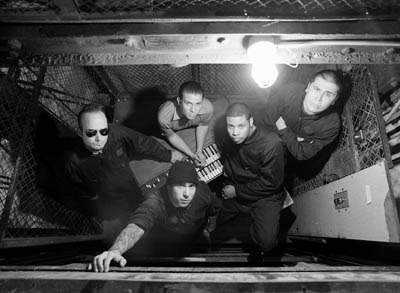 While SKA might be a term that leaves you with a dirty taste in your mouth after it's second coming in the mid-90s, Hellcat recording artists The Aggrolites are a band you should get to know if you have any interest in authentic rude-boy production.

Fresh off a U.S. tour with the Godfathers of Jamaican music, The Skatalites, and a European arena tour with 2-tone giants Madness, plus a mini-California tour with L.A.’s ska elite, Hepcat, The Aggrolites have gone back into the studio and recently completed their third album due to hit this June. Reggae Hit L.A. will be the second of their three album deal for indie label Hellcat/Epitaph. Singer Jesse Wagner sums it up, “We've been breaking our backs on the road for months and when we got back from touring we poured our blood, sweat and tears into this album. It's the tightest one yet. The real deal!”

Apparently a month-long album launch party throughout California is in the works.

And then after the month in Cali, the band begin their three week tour with two headlining performances, The Belly Up in San Diego on February 23 and High Rollers Scooter Rally in Las Vegas on February 24. Then they jump on the Dropkick Murphys tour along with Sick of It All and The Deadly Sins. The U.S. tour begins at the new Key Club at Morongo on March 1 with the finale at the already sold-out Agganis Arena show in Boston on St. Patrick's Day, March 17.