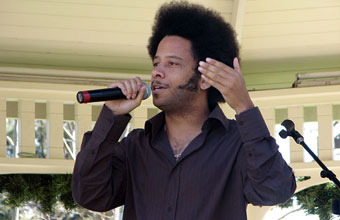 Raymond “Boots” Riley, San Francisco-based Marxist rapper who makes up half of The Coup is filing a grievance with that city's Office of Citizens Complaints after an alleged incident of racial profiling.

The rapper, who in 1992 formed The Coup with DJ Pam the Funkstress and former member E-Roc, was parking on his way to a friend's warehouse party in the Dogpatch-Waterfront zone of San Francisco where, cops in search of suspects in a series of tire thefts assailed Riley. According to the San Francisco Bay Guardian, who accused the cops of profiling, “Riley had just parked his car near the warehouse when he was blinded by flashlights, and he realized that he was surrounded by cops.”

A witness confirmed that Riley got thrown against his car and had guns aimed at him.

Said Riley to the Guardian:

“They were saying, 'Don't fucking move, don't fucking move,' and came straight at me. They put my hands above my head, searched me, and searched my car, even though they were looking for someone who was stealing tires. You know, if they had a description of a light-skinned black man with a big Afro and sideburns, maybe they should have taken me in. But they were yelling, 'Are you on probation? Do you have a warrant?' And every time I said no, they said, 'Don't lie to us. Don't fucking lie to us.' …There are stories all the time. Everyone knows you used to get fucked with in San Francisco and Berkeley. Usually it's not anything with me specifically being a rapper… I might have even more protection because of that. Like at this get-together, somebody came up and said, 'Don't you know who this is? This is Boots Riley.' They might not have known who I am, but they realize this isn't the regular case where they can do whatever they want.”

Riley also noted that this was not a singular event. He recalls being pepper-sprayed after a concert in 1995 after a “yelling argument”, and in 2006, on tour in Vermont, waking up with guns in the faces of many in his tour van while he was accused by plain clothed police officers insinuating that they'd witnessed a cocaine deal in the truck.

PrevPreviousChromeo tour, allude to peace process
NextDaft Punk's Electroma out on VICE in fall 07 with… robots??Next