How many mutual Facebook friends does it take to make a buzz band? 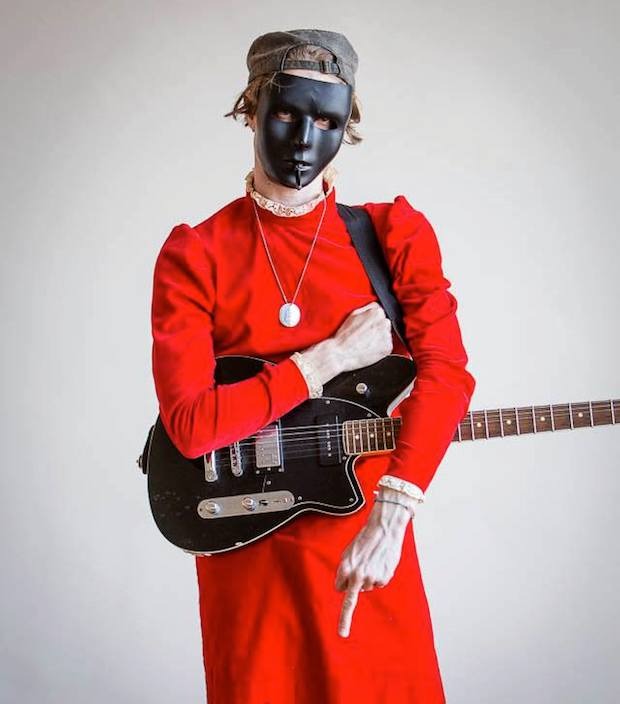 In the first days of May, my friend received a random Facebook request from one David Welles. Randoms pop up here and there but she had just started a new account to rid herself of such “friends” so this request piqued particular interest.

So we creep. But of course, there's no visible face in the profile pictures. The only picture was a dude wearing a Death in June-esque mask sitting/floating in front of a Photoshop'd pack of ecigs. There was a band name, however. “Are they any good?” I ask. “Sort of, yeah,” she says, pulling up ONWE’s bandcamp. After wrestling with the pronunciation, I crack a smile. “OMG, it’s ON-WE” Ennui.

I guess removing the physical aspect of meeting someone makes a transference of positivity that much easier.

Some weeks pass and ONWE starts cropping up on Facebook events across North Brooklyn. On the first day Impose’s summer interns come into the office, one turns to me and asks if I know a David Welles. “He just added me on Facebook. And he somehow is already friends with my girlfriend…”

As I try to quell projected jealousy, it becomes definitively clear that Welles is making a push. He is buzzing his name and raising questions. In the past, I’ve been surprised by how unthinkingly people accept “friend requests” even when initial suspicion warns against it. But the more “friends” of yours who “know” the person asking to be your “friend,” the more approved or “verified” the person seems. Or maybe it’s not the person, but the project, since not many people were too hesitant to add the person before the project started taking off? Maybe it's a complex mixture of both that only future history books on the dawn of social media can shed 20/20 on.

So how many mutual friends does it take? Again, that’s a tough one. Peak-buzzy musicians tend to get pretty guarded with their personal Facebook. Most opt for Twitter, where little blue verifications mingle kind of unpredictably between 1k and 10k+ followers. Mutual friends are relative to number of friends, anyway. Todd P has almost 5K Facebook friends, but he’s helmed a BK venue empire. I, somewhat new to public social media, am just shy of 900 “friends.” My most widely successful “friends” and I share around 35. To date, David Welles and I share 17.

Welles' highly-aware tactic (on social media, in lyrics and conversation) of raising more questions with every answer successfully piqued my interest further. His page yielded just as much awareness about his generation’s experience via pulsing millennial tropes delivered through the internet aesthetic: gentrification via check-ins; anti-capitalist sentiments juxtaposed to creative self-entitlement and consumer-based curatorial assertion; shimmery pop music in a DIY context; Bushwick; ecigs; social media as the millenial’s looking glass and autocorrecting autobiography; Bushwick; trying on identities as fast as Buzzfeed can make a quiz for them; Bushwick.

With these, unsurprisingly, Welles was not unfamiliar (or unintentional) when I asked him to answers some questions about his budding Facebook omnipresence on the very medium through which he was making his push.

Here’s what he sent back (in PDF form):

***First off, I ask that you please do not censor my self-expression by conforming my unique writing style to the limitations of the contemporary English dictionary spelling and grammar methods. That being said, I rly apprciate tha oppor2nity 2 do this intrview and prsnt my killerrr new band ONWE.

Is this your first musical project?
I was born with a penchant for artistry and a general precociousness, but I've never made music until ONWE. In my days as a male model, I had the technique of photogenic facial position and body contortion down to a science, but with music, I'm just faking my way through it—”until you make it”, they say!

Who is in the band? (names, involvement in music/aesthetic)
I'm CEO of ONWE Corp. and an authoritarian dictator of the creative department—PR always wants to get their hands in creative! Oh, and the live band? I call them my “minions”, for they do my bidding. I'd give you names, but honestly I can't remember.

What's up with the mask?
Omnipresent narcissism in American culture circa 2014 ironically renders us faceless —or maybe just deeply objectified, like plastic for example. Masks are made of plastic. Moreover, I've always found that I collect, that I'm a collector. I seem to collect ideas and personalities. (I will go with both of these answers—or are they one answer?)

Is David Welles your real name?
Yes, my real name is David Welles. But what's in a name? Isn't a name just the way humans label collections of molecules weaving through the infinitely dynamic universe? Yes, I am David Welles. I'm a real boy—on the Internet. My nose is not growing longer with every one of these factual statements. Sometimes I don't feel like a person at all.

Why ONWE? It seems like your making a lot of moves online and around the Brooklyn music scene for someone suffering from listlessness.
I was inspired by Csikszentmihalyi's flow model, which places “apathy” and “flow” at opposite ends of a spectrum. Clearly I'm “flow” and I'm busting my ass to get my message out there but my future trends analysis shows that a large portion of the American youth population is apathetic. I'm also about “selective apathy” as a method of protest. I h8 that I kno about kanye and kim and miley etc. and I have to see their sinister symmetrical mugs while I'm buying my anti-wrikle night cream at Duane Reade.

What statement are you trying to make with your Internet presence?
To preface, I've been reading a lot of books about theoretical physics these past months and have been a bit obsessed with the idea that consciousness is a state of matter, which suggests to me that consciousness is a shared experience—it's something tapped into by the human brain and/or mind. In short, there is no statement. To become an indie rock pseudo-celebrity, I have to give ONWE my all, and that means learning about how the cool kids create their brands and market themselves effectively.

a) How do you think it relates to Internet presences of artists today (and/or pre-Internet artist personas)?
The self-discipline required for self-actualization is the same in the post-internet era as it was in the pre. Whether your medium is art, politics, or finance, (or, better yet, a transcendent combination of all aspects of existence!), you're still balancing strength of will and determination with the often stifling energies of other beings and nature itself. However, transparency is the new opaqueness. I think that's why people circa 2014 seem so objectified, because we have been laid bare by technology. Still, somehow the essence of an individual remains an endless abyss, an indefinable enigma.

b) How do you want it to relate to those personas?
I'm a storyteller and a story writer and I prefer to enact a lot of the material that I write rather than perform it as myself. In an ideal world of my creation, I would be celebrated and validated as the genius who reënvisioned the artist's evolving identity. Or maybe I'm becoming an archetype of mediocrity in the genre of white entitlement—jk bb.

How did you find me on Facebook?
It would be detrimental to my bottom line to disclose my methods and metrics. To have a band is to run a business. I didn't always realize that. (Or maybe it wasn't always so?) Either way, I'm no longer romanticizing the process of “making it” as an artist.

How many Facebook friends have you gained in the last three weeks?
I feel I shut this question down with my last answer, but I'd like to take this opportunity to say what a pleasure it has been meeting you all on Facebook. Its much easier to change my own mind than the world's and engaging in the digital sphere is helping me chip away at my cynicism for the future. It's great: people accept my request and then ask me if they know me. I guess removing the physical aspect of meeting someone makes a transference of positivity that much easier. Oh yea, then there are trolls, bots, spammers, all min-maxing their way into our sphere. Wait, what was the question?

What's your favorite ascii art piece right now?
I had to look up what ascii art is, which wasn't a good sign as far as coolness and relativity goes, but it made me realize how much more I dig emojis and japanese emoticons (ideally they will replace all written language!). To throw something else out there, I'll say vaporwave pixel-art scenery is my current favorite internet art right now. I'm a tumblr guy, what can I say?

Listen to the A-side of his jk bb 7″ that was released back in February below and watch the video for the b-side, “Unpaid Internship” via Youtube. To watch the saga unfold, add David Welles on Facebook (or wait for him to get to you).