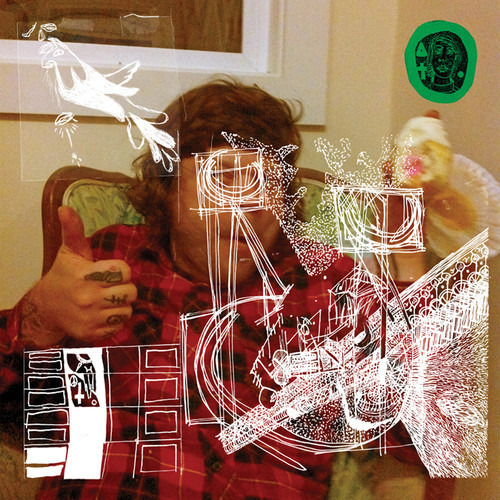 Needing some time away from CROSS and Salad Influence, Ma Turner began drifting off into the wee late night hours with his home recording equipment, turning the sessions into meditative escapes. The exercise began in early 2013 and by February of this year he had amassed an audio diary collection fit for a 12 cassette boxset and installation piece in Lexington, Kentucky's Institute 193. In a few weeks it will be condensed into a vinyl LP on Sophomore Lounge.

The session's explorations are virtually limitless, as the adventurous sound seeks refuge in twangy folk, twee, bedroom ambient, dub, and noise. Ma Turner told me, essentially, that any presence of genre is happenstance; he pressed record and let his mind wander, sometimes limiting his knowledge of the playback and layering atop it on instinct or by allowing himself to slip into a natural rhythm in which he merely focused on the pleasure in movement and repetition. It is here he discovered his meditation routine. The sessions became his cave, and his recording equipment, his power animal. While, Ma Turner is selling you a vinyl LP of his meditations, he is not selling you his technique. There will be no Ma Turner's Midnight Music Meditation video box set or seminars booked in convention centers. There will be no ZOZ tattoos, informing people, 'yes, you believe in Ma Turner.' Lady Gaga is not coming to Lexington for a week to study the teachings of Ma Turner's Method.

Without the understanding of Ma Turner's ZOZ Collection as an audio diary of prayer and meditation recordings, songs like “Living” merely exist as quaint acoustic bedroom recordings. Beneath Ma Turner's strumming is a ceaseless ambience that compliments his theories on life, which amount to putting your back into it, putting your soul out there fully, and knowing that even at your highest of heights, it can all fall out from underneath you. It's just living and it's all you can do.

The inspiration for the ZOZ collection is described as “an audio diary experimenting with themes of prayer and mediation.” In what ways were you experimenting?

I'm no expert on the subject but I've always been obsessed with the idea that there is a shared “power source” amongst all living things and that I feel closest to it when I'm playing music. The beginning of 2013, I began to record nightly by myself. I started most of these sessions late so that nothing would distract me/hinder my space or time. For hours I would lose myself in the process with nothing else crossing my mind. The more I became aware of this, the more I allowed myself to go in various directions without much planning, reason or regard for a final result. The less I attempted to control what I was doing with preconceived notions of “good” or “bad” moves, ideas, etc., the better I would feel at other points of the day. These moments were mellowing me out and I found that certain aspects of my life that were previously anxious or worrisome started to disappear. I began to rely on these sessions as a means of building up the habit of joy through catharsis inside myself.

The process got pretty goofy. It didn't seem important for me to actually hear a lot of what I was laying down until after the fact. I'd record layers of keyboard parts without an external speaker, opting to rely on my fingers' comfort level on the keys or I'd fall into repetitious cycles, just sitting there in silence, bliss out on the act of physical movement. A few times I sat there still and quiet for long stretches after pushing record, more concerned with picking up something “somewhere else” than laying anything down in a physical realm. I'd play it back and hear nothing but then turn it up louder and louder, double, triple the track until it was a huge sheet of sound and then build a song from there. Other instances I'd pick up an instrument, start playing and singing, not really trying to make any sense out of anything other than just feeling good or grateful or curious or even sadness or anger. I eventually stopped caring if what I was making was even music. When I'd listen to what I'd just spent hours on, it was almost as if someone else made it and the outcome was chilling yet comforting.

I'm not claiming to know what is what when it comes to what I don't know but I do know that there are things that I definitely do not know. Why not be open to that, right? Why not take it a step further and put your little antenna out there/inside yourself, just in case. I tried my best to maintain this outlook in the final mixing process. The moment I felt disconnected with a song, I knew I was almost there. It was a moving experience. I was trying to get in touch with that energy that I had neglected to check in with for quite some time and this was as close as I could get.

The collection expands across a multitude of style and genre, from dub and ambient, to folk and Eastern influence. In what ways, while exploring each composition did you find it to be prayer-like or meditative?

The majority of this material is culled from multiple layers of repetition. Like I mentioned before, I like to hold on to a bit of something and ride it until my concept of time is skewed. Once you can get time out of the way, traveling deeper is possible. By deeper I mean getting the mind aligned with what the self is really looking for in that moment, like watering a plant. Not to say that I am always successful in accomplishing that for myself or the listener but I know it's imperative for me to practice said action. The variations or styles just come in and out based on where I'm at the time. Like many others, I am inspired by lots of things and I suppose I don't have much of a filter when it comes to what I let out as long as it moves me. I'm certainly not a purist when it comes to genre. I'd prefer to cultivate my own.

What was the epiphany or inspiration to begin this sound experiment?

It wasn't intentional. Just a small idea that kept going because it was working for me. The first batch of songs were actually covers and I did it because I felt I needed to get back into playing music alone. Fortunately, it immediately felt right and I started devoting most nights to working on stuff. A few months in, I realized that I was amassing a lot of music and that I should keep it up. Six months into it, I realized that I had to finish out the year and put it all out in a box set. By November, I had designed the boxes, ordered the tapes, drawn the covers and secured a spot to have an opening. ZOZ COLLECTION was completed and hung in March. It got stressful but it was worth it. I learned a lot and grew from the process not to mention, I'm very happy with the music.

For the ZOZ LP you remixed, reconfigured, and collaged a eighty-three minute box set into an LP's-worth of material. What sort of challenges did you face in crafting the LP, while trying to maintain the original's state?

Actually the box is eight hours long (12 c32s). I chose a track from each tape and mashed them together without regard or regulation concerning the “original” versions. So much time was spent with those songs that I was more than happy to fuck them up however pleased me in the moment. It's fun to pick at something over and over again. It eventually falls apart and that is gonna be some wild sounding shit. Funny enough, the LP versions of the songs aren't too drastically different than the originals. It was just a matter of blending together sequences until listening to it made me feel like I disappeared again.

Ma Turner's ZOZ Collection is out May 6 on Sophomore Lounge.