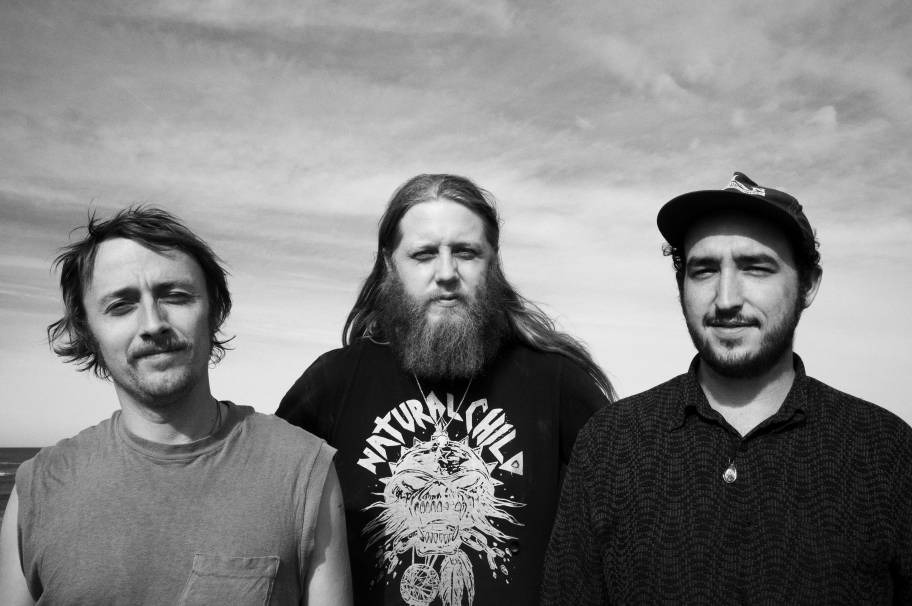 Southern boys Natural Child have won us over time and time again with their rustic records 1971, For The Love of the Game, Mother Nature's Daughter, Hard in Heaven, and so on. So when we heard that the Nashville trio of Seth, Wes and Zack had a 7″ split in the works with Guantanamo Baywatch for Suicide Squeeze, we inquired further and got a first listen to the twanged out Texas tales in the premiere of, “Don't Wake The Baby”.

From Tennessee heading out West, Natural Child takes us down to the Texas Panhandle between the respective counties of Potter and Randall. “Amarillo by morning, can't get it off my mind, you got me hugging my pillow, then taking my time, you got me drinking tequila, most of the time”, spinning tales of boot-scooting debauchery that drags along the whole family. The pedal steel twang sings songs of the night before, the night of, and the morning after with images of empty bottles, beer cans, cocktail ingredients, and paraphernalia strewn about the room. And like the slow burning come-down meter from a night's binge of intoxicants in excess, the cause and effects of consequence connect like a ball and chain of desire inhibited by the perils of responsibility.

From the venue to the hotel, the hormones and energy burn hot but are hindered on multiple fronts. The slow dance soft-shoe tip-toes with care in order to uphold the titular order of the A-side's wisdom of “Don't Wake The Baby”. Feeling fine, and ready to be making some time, interruptions and obstacles loom from the concierge's desk to the cries from the crib and nearby neighbors. “You are still horny, and I am still high, the front desk just called, we have to be quiet”. Natural Child turns the song into a public service announcement to caution those considering either starting a family or bringing the family, and newborns along the touring roads of Interstate 40.

After long last we had a chance to chat with Natural Child about everything from their Southern sound, stories about leaving encrypted messages for PDX buddies Guantanamo Bayeatch in the Portland Tribune classifieds, the Nashville report and more.

Are we very much talked about? We just go out and play the shows and stay pretty much unaware of what people think about us beyond the folks that want us to sign the ass on our album cover. People keep digging us and not much changes.

I had always wondered what kind of personal connection you all hand to Southern music, new or old, and how that was steeped into all your respective musical pursuits?

Well, when you're raised on Amazing Grace and Simple Man you're probably not gonna wind up asking your parents for a synthesizer for Christmas, but, even if we had, our asses would still be making that shit groove like its 100 degrees and humid out. We were born in the South and we're gonna die in the South and the same goes for the music we make.

Nashville seems like such a tripped out, vast, intriguing, eclectic, seedy, and old school providing ground territory. What has been the Natural Child experience in coming up in a it, living it, breathing it, and fuggin' owning it?

It's like LA except instead of actors there are bands and instead of cocaine there's church.

Given your wave of tours and releases, if you all could have your own like, Vulgar Videos or Cocksucker Blues type of edgy concert-road-film, what would it be called?

Who would you want to direct your own, Rock and Roll Circus?

With the upcoming Suicide Squeeze split with Guantanamo Baywatch, what has your recent communications with the band been like?

It's been texting mostly. I think they stayed at one of our houses when they were in town and we were on tour, but I didn't find any notes or anything. They also didn't destroy anything. Those dudes are cool.

We've been leaving them an ongoing complex encoded message daily in the classifieds of the Portland Tribune. Look for it.

Now let us discuss “Don't Wake The Baby”, is this like your down home on the hometown/prairie type of counterpoint to the dim-lights-thick-smoke-and-loud-loud-music philosophy?

Mostly just thinking about how hard it must be to have sex when you have a family.

With the split titled Surf N Turf, are you guys representing the turf and G. Baywatch the surf?

No, you've got it backwards and I want to make sure everyone is clear on that.

The same way we've closed out and rung in every year since we've been a band: on stage, bitch.