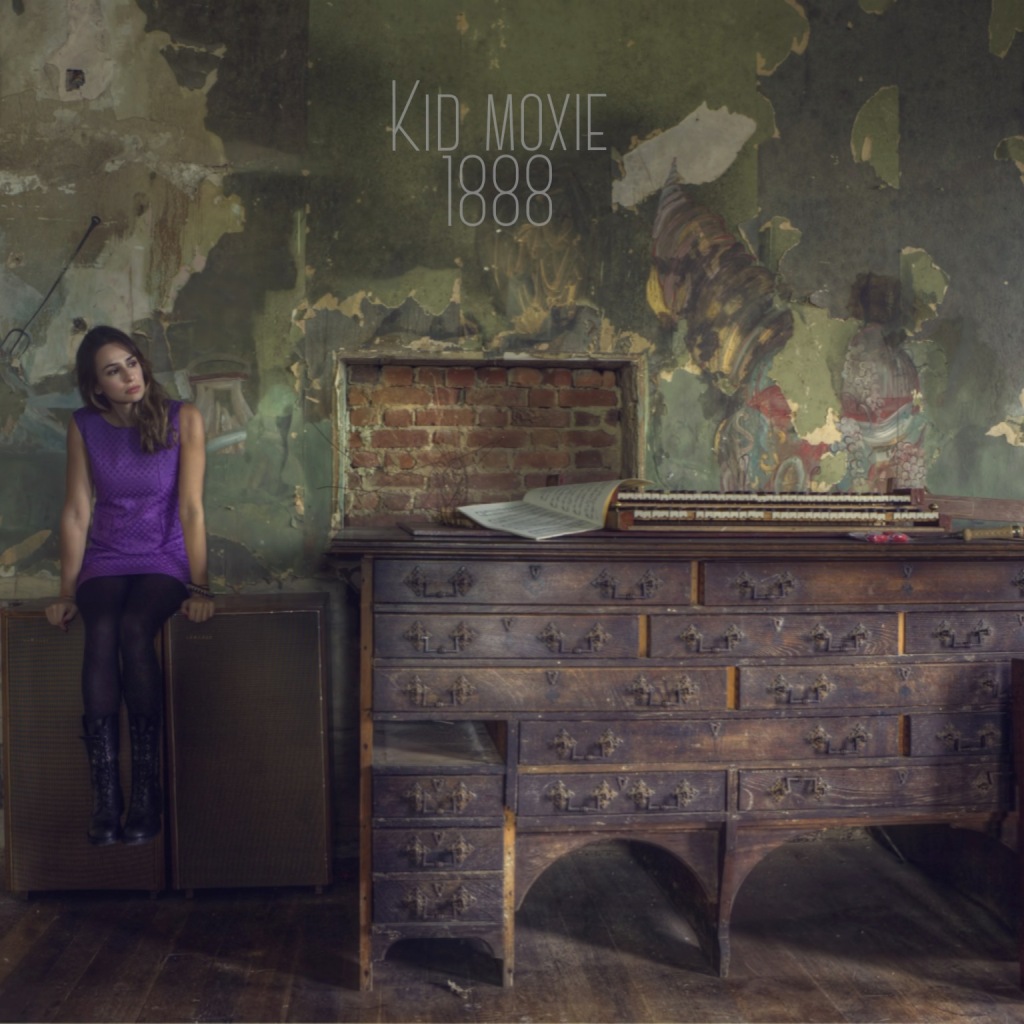 Elena Charbila has done the task of coinage so that journos don’t get it wrong. Under her Kid Moxie moniker, she’s calling her sophomore record, 1888, “cinematic pop” and given the contributions from Angelo Badalementi and Clint Mansell, it’s a label apropos.

1888 runs a fashionable gamut of cinematic textures, compartmentalizing all our heroes who happen to be Charbila’s heroes and in some cases, her peers. Nods to John Carpenter’s synth-tension exists in 1888, as does the grim western no man’s land sounds of Ennio Morricone. As a member of the David Lynch Foundation, Charbila has included nods to his crooked vision of the Inland Empire and even the lighter side that once collaborated with Julee Cruise and Angelo Badalamenti. Cinematic touchtones abound on 1888, but it’s not all Hollywood luster for Charbila. She collaborates with Gaslamp Killer on the title track and “Museum Motel”, two tracks that were born of several hours jamming in Gaslamp Killer’s LA apartment.

Charbila achieves the dense atmosphere she sought when production for 1888 began, but in all its cinematic ambitions, 1888 is not without its moments of tender pop bliss that can find their way onto the FM dial.

For “Mysteries of Love” what came first, you trying your hand at the cover or working with Badalamenti? More importantly what was your introduction to the song? Lynch, Badalamenti or Cruise?

I first heard the song as a teenager while watching “Blue Velvet” and I fell in love with the whole Lynch/Badalamenti world and the aesthetic stamp that they co-created. That song was their first collaboration and David Lynch actually wrote the lyrics. Needless to say that I’m still mesmerized by them, the same way I was then.

I didn’t even dream that I would get to work with Badalamenti. (That’s actually a lie. Of course I dreamed about it but I never thought it could come true.) Angelo heard my music and suggested that we meet when I visited New York. So a few months later we took a very memorable drive in the city while listening to his new recording of “Mysteries Of Love” and he suggested that I work on it with him and see what happens. I took the tracks back with me to L.A and worked very hard on it (I think I did about 89 takes!) till felt that I did my best to do this magical piece justice.

You’re involved with the David Lynch Foundation, which is not a Kickstarter for more Lynch films, but an organization concerned with introducing transcendental meditation to at-risk youths, veterans, the homeless, and prison inmates. What was your first experience with the practice and what did it open up for you as an artist and a person?

I gave myself the gift of Transcendental Meditation a few years ago on my birthday. I was very curious and eager to see where it could take me. After having practiced for a few years I feel that TM is the only meditation that works so simply and so naturally with our brain process. With it, I discovered the feeling of “nothingness” which is so full of “everythingness” (if that makes any sense). It is also a great stress reliever and a useful tool for artists to expand consciousness and stay focused on what makes each and every one of us unique.

In writing and recording 1888, what was your vision for the album and did it change at all? Were collaborations with Gaslamp Killer, Badalamenti, and Mansell pre-planned or did they arrive and alter the framework?

My main compass was to create visually stimulating music. A “dense” atmosphere. A visual diary of thoughts and fictional scenes. The collaboration with Badalamenti just happened to occur at the same time I was putting together the album and he was generous enough to let me use it for my album. As far as Gaslamp Killer, we’re also great friends so we would end up meeting up at his place, hang out and have hourly synth jam sessions from which the two tracks that are on my album came out of. We also worked on a couple of tracks for his own upcoming album.

Clint Mansell really helped me “shape up” the album. We met one night in his studio and he had all these amazing notes on each song on the album. I learned so much from that night and ended up pretty much following all his ideas. He liked the track “Lacuna” from the album, and he offered to work on a remix for it. Nothing was planned, everything just ended up kinda happening organically.

If you were to establish an ideal setting for your record? How would you describe that place?

I always say that caves and forests are the most visually inspiring places for me. But if I really think about it, the setting would be different for every song on this album. For example, “Lacuna” it would be an abandoned factory (which I actually ended up doing in the video).

For “Jacqueline The Ripper” it would be the streets of East London by Tower Hill.
“Museum Motel” would be heard somewhere by the mountains at night while a marching band would be crossing in the distance.

In your label bio, for previous album Selector, you coined it “gutter pop.” For 1888, you’re calling it “cinematic pop.” Do you intend to keep coining genres with each release? Or would you say you’ve found a sound worth sticking with on 1888?

The Kid has grown since the “gutter pop” days so I definitely feel like “cinematic pop” is more representative of what I have been doing. Having said that, I honestly don’t know what the next album will sound like. (A good reason to keep inventing genres is to simply let go of them more easily).

Kid Moxie’s 1888 is out December 2 on Undo/EMI and available for digital preorder on iTunes.