The Best Music Writing of 2013 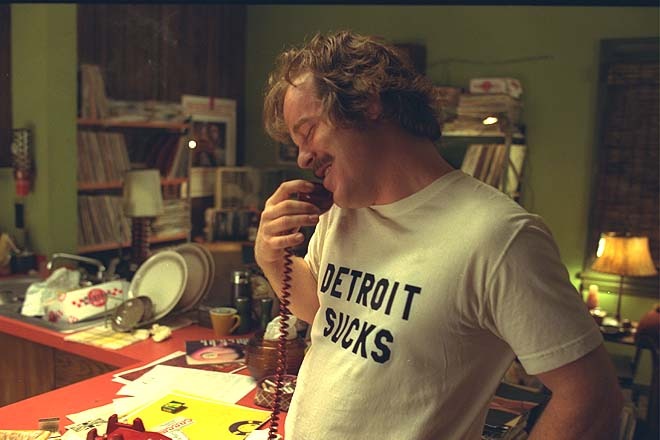 It's widely understood that writing about musicians—even talking to musicians—is a challenge comparable to burying yourself in a well with no food and water for weeks and weeks and weeks, and then emerging to find that everything in life is a lie and Tamagachi have been discontinued, but hey, here we are. Doing it every day. For you, the reader. We at Impose may work tirelessly at bringing you the best coverage of our favorite musicians, whether that is in finding out what artists will gift their moms on 4/20 or presenting multitiered analyses on small, underrated sub-metropolitan scenes, but we aren't the only ones insane enough to do this for a living. There are others—plenty others—who have deepened our appreciation for music, writing, and the world that surrounds it this year, and we thought it high time that they got a shoutout from us. After all, we can't be trusted on everything. (Just mostly everything.) Below, we've listed for you some articles that got us thinking differently about music this year—from the sharp to the strange to the fawning to the critical. Magazines may be folding, but good writing is still in dense supply. Allow these articles to keep you warm at night.

Behind Kanye's Mask by Jon Caramanica for The New York Times

“Mr. West has had the most sui generis hip-hop career of the last decade. No rapper has embodied hip-hop’s often contradictory impulses of narcissism and social good quite as he has, and no producer has celebrated the lush and the ornate quite as he has. He has spent most of his career in additive mode, figuring out how to make music that’s majestic and thought-provoking and grand-scaled. And he’s also widened the genre’s gates, whether for middle-class values or high-fashion and high-art dreams.”

Hall of Game: Super Ugly by Andrew Nosnitsky for Pitchfork

“It's not just a question of sonic fidelity, either. Hip-hop thrived under a “take what you can and make something out of it” ethos. Don't have drums? Take them off your parents records or, later, find a machine that'll do the work for you. Labels won't listen to your demo? Press up your own records or, later, dub a tape. Nobody's giving you a video budget? Tape yourself on a camcorder and send it to local access. In hip-hop, this DIY approach was never as explicitly politicized as it was in punk or indie, it was mostly circumstantial and evolutionary.”

Read the “Stomach-Churning” Sexual Assault Charges Against R. Kelly in Full by Jess Hopper and Jim DeRogatis for the Village Voice

“I was one of those people who challenged DeRogatis and was even flip about his judgment — something I quickly came to regret. DeRogatis and I have tangled — even feuded on air — over the years; yet, amid the Twitter barbs, he approached me offline and told me about how one of Kelly's victims called him in the middle of the night after his Pitchfork review came out, to thank him for caring when no one else did. He told me of mothers crying on his shoulder, seeing the scars of a suicide attempt on a girl's wrists, the fear in their eyes. He detailed an aftermath that the public has never had to bear witness to.”

“When he first said Chris Brown, I didn't immediately change the way I thought about him, but for the first time in my career of covering R. Kelly (which, relative to some, has not been that long), I had to acknowledge that maybe I was doing something wrong. He said Chris Brown and my stomach churned, but it wasn't my “I'm done with R. Kelly” moment at all. I'm pretty sure I continued to laugh and joke and Instagram and tweet and text my experience at the Q&A. But in the back of my mind, I began to think that maybe — just maybe — he wasn't a guy I wanted to spend my time writing about. And promoting. And joking about. Perhaps this should have clicked years ago, before I was a writer and when I was still a teenager treating “Half on a Baby” like a hymn, but the time had finally arrived. I started to wonder if I was the company I kept. Perhaps my public endorsement of him was beginning to look like a reflection of my values.”

Capital STEEZ: King Capital by Eli Rosenberg for The FADER

“Steez had been as purposeful in his death as he had been in his life. The building cops say Steez jumped from, 40 West 23rd Street, was at the time a hip-hop hub, serving as the headquarters for apparel company Ecko’s magazine, Complex, and Cinematic, which had secured office space there through a deal with Ecko (both have since relocated). A guard at the building told me Steez was let in—he counted as an employee—and at some point walked up to the roof he used to freestyle on with his friends on better days. Witnesses reported seeing the body lying in the middle of the street shortly after midnight. Though it may be a coincidence, it’s worth noting that the numbers in the date—12/23/12—add up to 47.”

“Many know how it goes. The Twin Shadow scenario could have taken place in the offices of any festival in America; what's important is that it is happening here. While Afropunk deals with the same lineup struggles as other festivals, those struggles are compounded by the fact that it's a festival celebrating black alternative culture; not only is that a vast and complex topic, but many rising black alternative artists shy away from aligning their music with the race conversation (it's already tough enough to get signed). For another, Morgan and Cooper—a veteran A&R queenpin who signed Nelly and Cash Money Records in the early '00s and now runs Afropunk's sponsorship operations—are also dealing with potential brand sponsors who hesitate or downright refuse to partner with an explicitly racialized festival, often because they view it as an “urban” (read: black, poor, profitless) demographic.”

Punk Archiving by Paula Mejia for Fvck the Media

“Before proceeding to discuss his archives, MacKaye took time to contextualize by explaining his relationship with music. Hearing him speak about his first punk experience sent shivers up my rain-drenched arms. He described the first punk song he ever heard, “Bodies” by Sex Pistols, a song famously about abortion. It scared him. 'When something scares the shit out of you, go toward it,' he told the Library of Congress. 'You’re about to learn something.' “

Punk Rock Is Bullshit by John Roderick for Seattle Weekly

“Punk taught us to rebel against authority until “authority” included everything: piano lessons, fire insurance, leather shoes, and, ultimately, growing up. Punk taught us to have contempt for every institution, except Fugazi, until contempt and suspicion were the first and only reactions we had to everything. Good news was embarrassing, success was shameful, and a happy childhood an unthinkable transgression. These personality disorders were just punk in practice.”

In an alternative reality where, instead of dwindling in popularity throughout the early-to-mid-00's, post-grunge became the only form of music played, listened to, or written about in the United States by Daniel Kolitz for The Printed Internet

“To widen the perspective to the ultimate level would entail a list incorporating all possible objects relating to the production of music, or what in Infinite Music I called 'musical objects.' Musical objects are the dramatis personae of music – they represent any and all possible subcategories of 'music.' Listing 'musical objects' of the year allows one to dip beneath the level of the individual track to pick melodies, basslines, timbres, lyrics, or to expand into the space between releases to pick instruments, genres and musicians themselves.”

The Pearl by Sasha Frere-Jones for The New Yorker

“Earl, born Thebe Neruda Kgositsile, was recognized early on as the most gifted m.c. of the group, and his major-label début, “Doris,” comes out this week. He is an exceptionally good rapper, talented enough to overcome the threatening, offensive mojo that Odd Future has spent years conjuring.”

“Mac DeMarco has road rage. Less than one minute after we hop in the Dodge minivan he uses as a tour van, he is flipping the bird to the big dude behind the wheel of the automobile he just cut off. “Fuuuuck! Youuuu!” Mac yells out of the window, dragging each word out nice and slow and loud while leaning across his girlfriend, Kiera, who is sitting calmly in the passenger seat. The big, now-furious dude returns the favor: He sticks his left arm out of his driver's side window – he is nearly touching Mac's van, because that is how close they came to hitting each other – and shoots his fat middle-finger straight-up at Mac and yells, “Fuck you!” After a brief but awkward staring contest, the man drives away.”

Merrill Garbus of tUnE-YaRdS on Haiti for The Talkhouse

“We arrived in Souvenance in time to see the opening ceremony, in which all of the elders of the vodou community surrounded a table, lit with candles and lined with rum and other offerings to the spirits. I cried, a lot, during this ceremony — I couldn't believe I was there, in a small pavilion in a tiny village on an island in the Caribbean Ocean called Ayiti. I just couldn't believe I got to be there.”

“It was “Rubby Bulbs”, one of hundreds of songs that Neutral Milk Hotel never committed to a proper release, that sent me over. Mangum holds one note for 12 seconds halfway through. It sounds like he’ll never run out of air. I remember looking at the ceiling, exhausted and 15, feeling the boundary between me and everything that wasn’t me dissolve.”

Beyond Inversion: How to Make a Benefit Compilation by Jessica Skolnik for Rookie Mag

“Do some research before you decide whom you want to raise funds for. After you find a place that speaks to a cause that’s important to you and check out where their funding comes from, see if they have a specific project that needs money and public attention. It’s best to keep your focus local and practical—big organizations might be flashier and/or better-known, but a lot of powerful work happens outside the spotlight.”

Pissed Jeans: The Curious Case of an Unrequited Hard-On by David Bevan for SPIN Magazine

“There's punk rock and there's punkity rock,” says Mark Arm, Mudhoney frontman and warehouse manager at Sub Pop, home to Beach House, Fleet Foxes, the Postal Service, and Pissed Jeans. “Punkity-rock is whoa-whoa-whoa, sing-along choruses and usually geared toward teenagers at the mall. Pissed Jeans are the furthest thing from that. You're not going to make a shitload of money doing what they do, so you have to really, really want to do it.”

“The real reason album sales are down is because there’s too much good music out there being made by a ridiculously diverse bunch of people. We’re being overloaded with amazing albums and people just can’t keep up. I’m not fucking kidding here. If you can’t find good music in this day and age, then you aren’t trying. You’re in decline but, instead of looking in the mirror, you’re blaming music and society.”