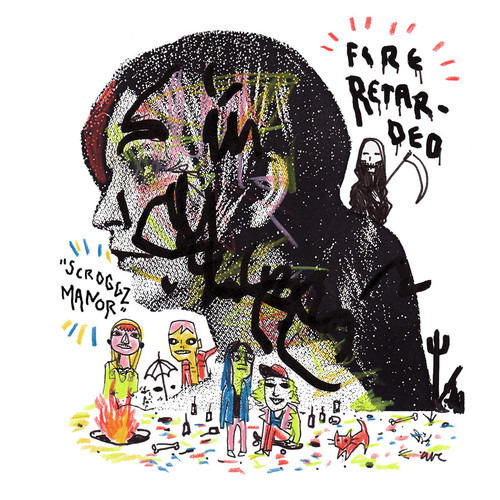 If the rising success of guitar-heavy bands like Diarrhea Planet, Purling Hiss, and soon-to-dominate No Regrets Coyote haven't had you convinced that the shred is back in session, then you need look no further than Wisconsin's Fire Retarded. After we premiered the monstrous 7″ from the band this past October, they headed back into the studio to lay down the forthcoming Scroggz Manor full-length, the first track from which you can hear below. “Meat Stairs” moves fast enough for you to lose track of your own heartbeat, and as the group pounds through a hypnotic refrain, a blistering solo is not far off, making the ultimate trio of heavy shit, sludgy shit, and take-no-prisoners vocal stylings move the track through to its crashing conclusion. Hold on to your hats, if you can—Fire Retarded is going to attempt to burn them right off your head.

“Meat Stairs” will feature on Scroggz Manor, set to release on April 20, 2014 through Big Neck Records. To celebrate the new year, Fire Retarded is out on the road at the dates listed below, blazing a path of shreddy gasoline through the States and back.

PrevPreviousGGGHOST TOWNNN, “Some Asshole Stole My Phone At Ty Segall”
NextThe Best Music Writing of 2013Next