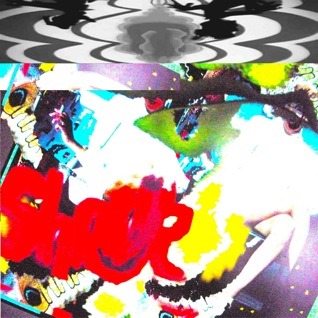 Sorry for all the names. There's a small knot of east coast sampler and noise body music that we've fondly followed from early last year. Let's try and untangle it:

We first caught on to Best Hits at a double-booked show that pared future loop music with noise punk. Ducktails and TV Ghost in one night. Best Hits' tropical storm of beats, samples, and synth skronk was made in part by Matt Weiner, who operates solo as Twins. Lately Luke Perry (a.k.a. Mr. Ryan Howe) has seen blog love for fitting in with his “90210 hypnagogics and catchy cyborg mutations,” but prior to that, he was half of dANA, a Bard-based project that heard Best Hit's slithery electronics and raised it a couple more tweaks and rumbles. Same poker table, though. The other half of dANA, Mr. Charley Lanning, contributes to Shrur.

Then there's the third collaborator, C Powers, who we don't have a jump on. Sounds like some retro funky disco stuff to me.

As for Shrur. The 80s were invited but they behaved themselves. These tracks, off an album called 4shrur, mark a fantastic fusion of blissed stoner-with-a-sampler sensibilities with loping house and tropical beats. The most lucid and danceable of the output that these headtrip musicians have released.

Malibu Body Trip goes a step further towards bratty beat-driven pop music, without losing wobbly synth gurgling, and a couple dithering tension-release fall-outs. Look out for this track on an early 2010 cassette release.