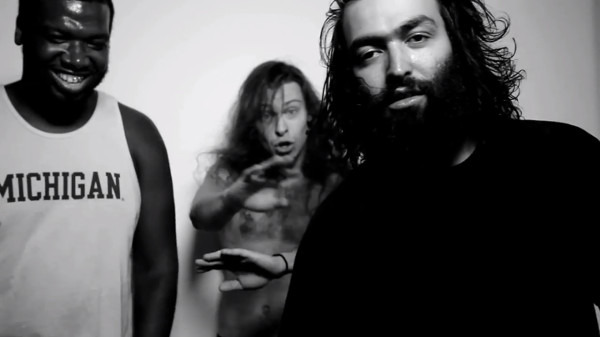 Faced with the dilemma of how to cover so many videos from some of Impose's favorite rappers in one day, I've created an impromptu video countdown that may never happen again and will certainly live in the shadows of Yo! MTV Raps and Rap City countdowns.

Last month Nocando dropped his long-awaited Jimmy The Burnout LP, which is the source for his “Never Looked Better” video. A subtle ode to High Fidelity, Nocando's “Never Looked Better” deals with the Joni Mitchell's famous adage of regret, but in a manner that retains a devious plan to recapture the past. The video finds Nocando in Downtown LA, pursuing a past love who each time he can never seem to appreciate in the moment, but upon reflection is understood as the pinnacle of pursuit. Never one for the formulaic, Nocando's rake-ish propaganda is countered with a twist ending and a guest appearance from an Odd Future affiliate.

Nocando's Jimmy The Burnout is out now and streaming on Hellfyre Club.

Need help with your appetite? Homeboy Sandman's “Fat Belly” video will put the pangs in your gut with his back yard barbeque spread. Off White Sands, a collaborative album with Paul White, “Fat Belly” might be one of the most informative tracks dedicated to dietary habits as Homeboy endorses Trader Joes' almond milk prices, sundried tomatoes' versatility, and mango as the best fruit to freeze before consumption. Homeboy Sandman has built a career off being down-to-earth, and the “Fat Belly” video is no different as it's clear he didn't hire models or rapper friends to appear in his cook out, but invited the neighborhood over for a meal that just so happened to be filmed.

Kool A.D. seems intent to take his self-referential style to such an extreme that it's a chore to ascertain the difference between his old and new records. He maintains no industry representation, self-releasing his music onto Bandcamp, and pairs his albums in themes so similar that checking the release date is usually our first step before clicking the play button. Taken from his Word O.K. release, “Tight” is a Toro Y Moi produced cut bearing sonic similiarities to Danny Brown's “Detroit 187” off XXX—possibly not by accident considering the world of Kool A.D. Entering his chamber are Lakutis and Mr. Muthafuckin' eXquire, who settle in quickly with gratuitous raps that will make your sister blush. Even though eXquire casts his own verse off as garbage, there's something endearing in his filterless stream of conscious style that finds connections between the Kraken, asses getting cracked in, dashing, reindeer, and making it rain in strip clubs.