Jelly Pool Parties in jeopardy, Chuck Schumer joins fight to save them 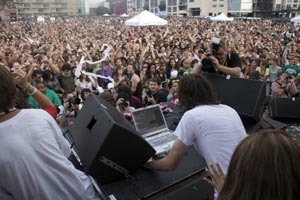 The Jelly Pool Parties have been a summer institution in Brooklyn for the past four years. If its going to continue it needs your help.

Yet, for reasons we still don't understand, the New York State Parks Department hasn't made the East River space available to Jelly for 2010. More upsetting is the interference they seem to be getting from the Open Space Alliance, a non-profit whose purpose is to fight for more parks and free programming. Despite the goals set forth by OSA–and the large amounts of funding they receive–they have done little in the way of free programming, so it would seem strange that they are not fighting for Jelly to return.

U.S. Senator Charles Schumer, a Brooklyn native, is now leading the
fight to save the Jelly Pool Parties. The Senator took the stage at the
last Pool Party in August 2009 and pledged that the free concert series
would return to the waterfront in 2010. Senator Schumer and his staff
have been campaigning for the Pool Parties to remain at the East River
State Park, speaking to other state and city officials to ensure the free summer series will be back for a fifth year.

The fight is ongoing and now needs your help.
Jelly is reaching out to the community to call Senator Charles Schumer
at (212) 486-4430, or via email phil@schumer.senate.gov
to show their support and express any concerns on behalf of this
tremendous free community program. The Senator will relay the public
opinion to the NYS Parks Department and the Open Space Alliance.

Oh, and for that Mayor who rigged a third term and likes to make splashy community statements with more parks and bike lanes, we hope you get involved too.