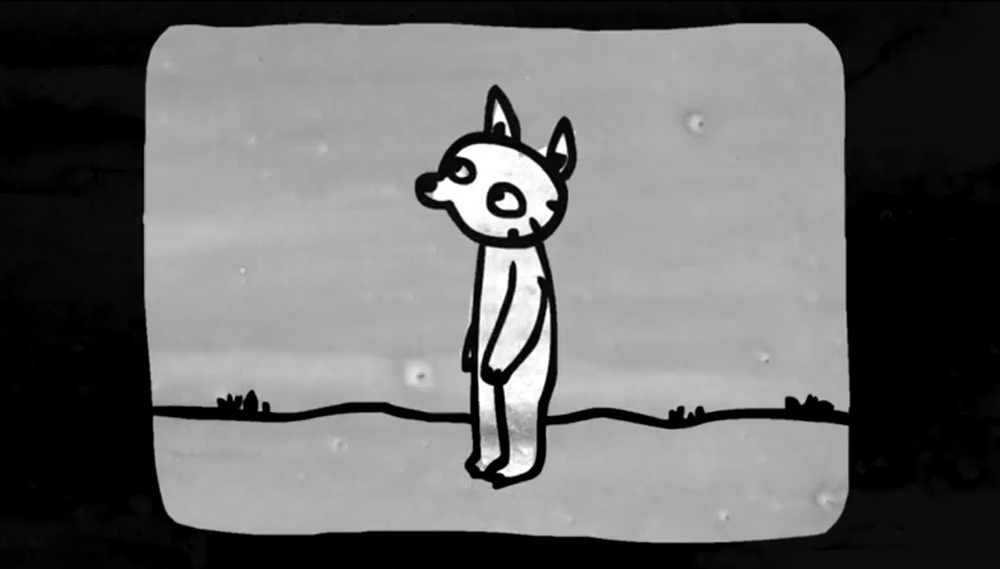 In September, U.K. indie pop pals Joanna Gruesome and Trust Fund teamed up for a six-song split, released via Reeks of Effort (UK) and HHBTM (US). We’ve already shared the hooky mid-tempo call-out cut “Jerome (Liar)”. Now we are excited to now premiere a video for the song, plus a video for Trust Fund’s “Reading the Wrappers”. The part-animated, part-filmed videos were created by London artist and illustrator Rose Robbins. “The videos are about a pair of individuals and their quest to understand each other,” Robbins said. “I wanted the videos to have a narrative link of some kind, despite the songs being by two different artists, and about two separate things.” Robbins added:

In the end I decided to make the videos about a pair of odd characters who seemed to have some communication issues. After this was decided and the creatures drawn, they sort of took over the narrative and I lost any sense of what I was originally trying to ‘say’, which was quite a relief actually. At the start of the project, I really wanted to animate the whole video, or at least layer some animation on top of the video like in Roger Rabbit, but my computer broke halfway through production, so by happy accident I ended up bringing the poor creatures out into the real world.

There is a theme of nature and landscape in both Joanna Gruesome’s and Trust Fund’s songs, so I wanted to get some plants and a bit of the ocean in there to coincide with the goofy cartoon characters. Also I wanted to mirror Joanna Gruesome and Trust Fund’s DIY aesthetic with the videos, hence it is a bit rough around the edges in parts. It was a very windy day the we did filmed in Suffolk, and the bushes and trees were flapping about like nobodies business, I guess it was kind of like they were dancing? Dancing badly anyway.  The videos were ludicrously fun to make, and I hope you enjoy watching them.

Watch both videos below.

PrevPreviousWatch Episode 2 of MTV 12 with VJ Misty and VJ Dawn of Bad Canoes
NextMusic Twitter Responds to “The War On Drugs: Suck My Cock”Next