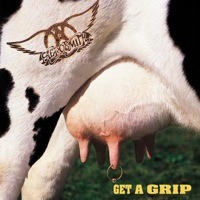 I can't say that I knew Aerosmith that well, but he seemed like a nice dude.

Get A Grip was the first compact disc I ever received, in 1993 at my 11th birthday (thanks, Manoush!), and I will never forget the pre-Photoshop era pierced nipple on a cow. Where was PETA back then to let me know that this wasn't titillating?

While I had no idea in 1994 that “getting a grip” was basically a mantra for a band doing their best to avoid the sweet sensation that just one more needle in the arm would bring, I will always remember the cow. Not so much the songs.

But y'know, they were a protean punk heavy rock band. There must be some 70s-era junkies or suburban kids out there whose minds were once blown, because they hadn't had the pleasure of hearing the New York Dolls before they'd caught “Dude Looks Like a Lady”.

But now they are no more.

The shoulder bone Tyler cracked by falling off a stage earlier this summer is apparently the straw that broke the band's back, though the sticky layers of psychosis sweltering in public statements by the rest of the band suggest the years of walking on tip toes they'd already endured.

That’s one thing I’ve learned to live with. I try to overlook it. I like to pick my battles. Frankly, the last few months I’ve been wanting not to rock the boat. I don’t want him canceling any more gigs. We really wanted to do these last four. We just kind of didn’t want to call him out or anything and get him anymore pissed off, for whatever reason. So we just let things lie.

While it's fun to imagine the demographics of a post-Aerosmith Steven Tyler solo concert (women waiting on his child pay, the guys they are now married to), we are not gathered here to discuss what the dude who looks like a lady will do, but what he has done. The death of Aerosmith is one more nail in the coffin of the one-eyed, blood-sucking behemoth that is the old guard music industry, and for that single nail, we are grateful.