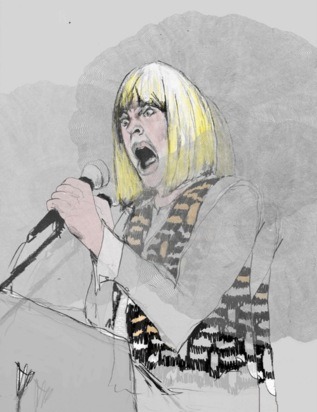 So there's the sad news that Genesis P-Orridge returned to its home in New York before Throbbing Gristle finished its engagements in London:

In the evening 27th October TG members and their associated managements received two emails from Genesis P-Orridge stating he was no longer willing to perform in Throbbing Gristle and returned to his home in New York.

“Cosey, Sleazy & Chris have concluded that once more, and for the time being, Throbbing Gristle has Ceased to Exist, at least as a live entity.

Quietus notes quite rightly that the remaining members, who seem eager to continue their work together under the name X-TG, have been responsible for much of the interesting sonics behind the recent incantations of T. Gristle. Which brings us to the point.

Remember when we erroneously yet accurately reported on the demise of Aerosmith, which as it turned out was actually just the demise of Steven Tyler's ego hovering over the other three members like a constipated turkey vulture?