Waving the freak flag at the World Series 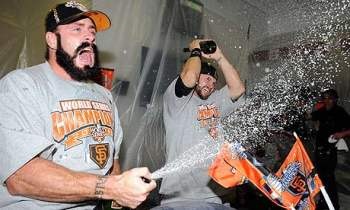 Baseball is America's past time. It's the sport that got our country through wars, depressions and according to the movie A League Of Their Own, is the finest achievement of the 19th Amendment. Baseball is the antithesis to counterculture and pretty much everything associated with the disenfranchised and liberal. Or at least it was, until the San Francisco Giants won the World Series on Monday.

Not since Doc Ellis pitched a perfect game on acid has counterculture been as prevalent and relevant, excluding the meathead MMA fighter on steroids sort of baseball culture counter to puritanical standards, as it was in this year's World Series. In order for the San Francisco Giants to win it all, the ball club had to defeat a media mogul and two-headed ex-Presidents beast. Only then was SF granted the liberty to let its freak flag fly.

For those that were not paying attention to the Young Marble Giants of the West, allow me to shed some light on the ball club's thick-freakness. A team such as this can only be assembled in one of America's most obnoxiously liberal cities; the two-time Cy Young award winning pitcher got busted for pot, and he's the same pitcher that has said “fuck” multiple times on television. The closer keeps a close friend called “The Machine”, who was revealed to be a gimp behemoth, third baseman Pablo Sandoval is lovingly referred to as “Kung-Fu Panda” and Barry Zito is just a weird dude in general. These are your world champions, a bunch of young misfits that could be remembered in the history books as some of baseball's most dominant athletes, possibly a bullpen up there with the Braves heyday of Glavine, Maddux and Smoltz.

Let's not forget the ever-fearful dangers of a fanbase that is “smoking weed over there”:

If ever baseball was in need of a ratings boost, it might regain its footing with the younger generations by advertising the outlaw, mixed with weirdness, demeanor of the Giants. It's already begun with the manufacturing of “Let Timmy Smoke” t-shirts (Sorry Prop 19). With 12 roster players under 30, making valued impacts on a game to game basis, including the post-season run, the Giants mark the potential dismantling of the old guard. In the least, the Giants should be remembered as a team that overcame that paranoid possibility that Ted Turner had bought the Braves into the Series and that the Bush's still had absolute power over us. Ever since NBA official Tim Donaghy was exposed for fixing games, I've been on red alert that maybe, just maybe the results of professional sports are as pretend as the WWE.

Despite these concerns that the chips were stacked against them not because the Giants are prone to leaning on its bullpen to the point of offensive prostration or because they had to pass through the eye of the diamond on the championship rings worn by veterans like Cliff Lee, Roy Oswalt and Roy Hallady, but because the owners' manner of power is unsettling, makes the World Champions honor all the more valuable. This is truly a team that reflects its city's ideals and idiosyncrasies. Politically, the road of social liberation in SF has left blood stains and the litter of shredded Propositions up and down Haight Street. Suggesting a championship will heal wounds is beyond sanguine, but SF should value this stretch of media attention. Its champions are bold enough to take their proclivity for weird antics into that national spotlight and make conservative America squeemish, even if all we get is a few more Machine appearances.