Perfecting the art of losing 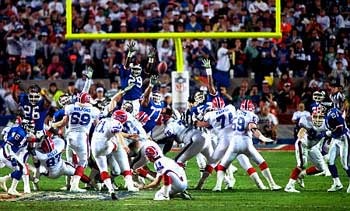 Progressives across America are lamenting what went wrong in this year's midterm elections, but as a life-long Buffalo sports fan, I've become accustomed to gut-wrenching defeat. Maybe I can lend a hand to those searching for answers.

Buffalo is a great American city. I'm not making that up, it actually says it on the signs when you drive into town. And it's not just lip service to make you feel warm and fuzzy as you enter the cold, snowy region. Buffalo is the perfect analogy for American politics; we always come so close to the realization of amazing things, only to end up losing in the most dramatic fashion possible.

Where to begin? Wow, well, of course there was the four Super Bowl losses in a row, starting with the most dramatic in Super Bowl history, “Wide Right.” After a fourth crushing loss, the Bills stopped making the championship game while Buffalo's biggest sports icon—O.J. Simpson—was making history of his own. Sadly, the Bills haven't been to the playoffs in a decade now, but even that bit of info is not without its own historic context. The last time they were in the playoffs was in the 1999-2000 season, which ended in the “Music City Miracle.” Needless to say, the “miracle” didn't apply to Buffalo's perspective. And that's only in my lifetime. Did you know the Bills won the last two AFL championships before the first Super Bowl in 1967? They actually hosted, and were favored, in the first AFL championship game to decide who would play against the Green Bay Packers in Super Bowl I. They lost.

Buffalo's not just a football town though, it's one of the biggest hockey cities in all of North America, with many U.S. Olympians coming from the humble blue collar area. And like a Democrat voting in his first election this year, my earliest hockey memory is one of the bloodiest moments in the sport's history. Of course, the most famous hockey player in western New York's history is ex-Buffalo Sabres goalie Dominik Hasek. His stay in Buffalo was the highlight of the Sabres' best years, coming within one game of the Stanley Cup. That one game just happened to be the second longest Stanley Cup finals game in NHL history, losing in triple-overtime to the Dallas Stars with Brett Hull's “No Goal.” (Notice a trend with the names here?).

Yet if I've learned anything in my lifetime of rooting for the underdog, it's that anything less than being gracious in defeat will leave you labeled a sore loser. So in these trying times, may I offer the progressive Americans out there these points of advice to help be sorely gracious.

First of all, you must understand that the bad guy wins more than the good guy. He doesn't always win, but he wins more often, so in the law of odds, your chances of an outcome you desire are higher if you root for the bad guy. And how do you know who the bad guy is? In sports it's usually the richest, most powerful teams who have an economic advantage over the poorer teams. In politics, it's pretty similar, but you can also throw in some details like: If you think universal health care for every taxpayer is a bad thing, if you have any ill will towards immigrants in a country founded on immigration, if you think you deserve a tax break because you make millions of dollars, if you've ever referred to the President as the “N” word (even in your mind), these are telltale signs you're a bad guy. Of course, these points aren't reserved exclusively for conservative Republicans, but history is on their side.

Secondly, and above all else, hope for the best, but always expect the worst. In a country where the underdog is the group of people who believe tax payers should benefit before multi-national corporations get tax breaks, it's hard to expect anything less than losing. We like to believe this is the greatest society in the world, yet in my lifetime it's been the racists, homophobes, and corporate lobbying elitists who have won more often than not. Consider in my 30+ years, the only time the budget has been balanced and the American workforce had an increase in wages was during President Clinton's eight years in office. The other 22 years going back to 1980 have resulted in major debt for the country and increasingly lower income for the American workforce. All under a Republican watch.

Which brings me to the last point: Common sense does not reign supreme when it comes to winning and losing, so don't try to rationalize it. You'll end up going crazy.

I realize this may not be an uplifting tale, but losing never is. I can only hope you might learn a valuable lesson in this season of political upheaval, and maybe, just maybe, you will now feel a bit of sympathy for what Buffalo sports fans have endured year in and year out. Think of the 2010 midterm elections as the “wide right,” the “no goal,” or the “O.J. Simpson” in the fight to make America better. Here's hoping it will give you a better appreciation of winning for those few times you actually do. Like ticket sales for Buffalo sports teams, the progress of America depends on it.