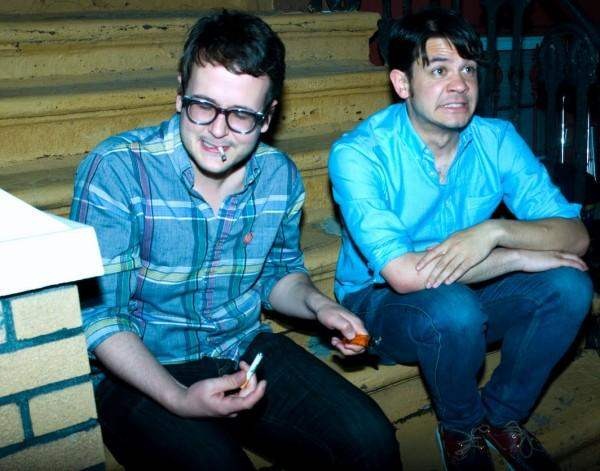 Knight School have their second album Revenger out via Make a Mess Records. Chris Balla took the time to answer some of our pressing questions concerning his labelmates Grass Widow and Nodzzz, perspectives on the collective scope of the music business, the California dream, and the near-mythic existence of a few Knight School CD-Rs containing new material.

How was your experience here in San Francisco?

I hadn't been out of New York City in nine months and I haven't been to California in ten years so it was a much-needed vacation. I saw some family in Sacramento, played a show, did some scenic drives, hungout in parks, bookstores, record shops, ate awesome Mexican food, dug the trees- it was truly perfect. I was born in Palo Alto, but grew up in Texas and we always used to take road trips to the Bay Area to see family. San Francisco is full of a lot of hazy memories and weird nostalgia.

How did the Rickshaw gig treat you?

It felt really good, just playing ina different city to a whole lot of people we didn't know. We really want to come back to play some more.

Describe how you got signed to Make a Mess Records.

Eric [Butterworth, who runs the label] had sent us a couple of emails saying he liked our tunes long before we had played any shows and even before I had joined the band. He eventually ended up asking us if we wanted to do an LP with him. Eric is the coolest label guy in the world, and Make A Mess is one of the best labels out there. I still can't believe it happened.

Everybody on that label is so much fun. With a winningstreak like they got, are there insidious plans for Make a Mess to sell 49% of their label shares to EMI?

No way dude, did you see that econoquote on the MAM Myspace?

[The quote from the Influences field from Make a Mess’s Myspace reads:

“Another stepping stone on the way to the big leagues. Keep an eye open for the next big thing. Corporate rocktactics in an underground scene. Have we forgotten what econo means?

When I was 17 I visited SF with my still best friend. I walked bright eyed downtown with skateboard in hand weaving in and out of yuppies, tourists, and crackheads. A spangeing crusty told me to throw my board down and make a mess.”]

I think MAM Records has a C86 agenda at work with the wonderful likes of Brilliant Colors, Grass Widow, Noddzzz, The Proper Ornaments and company signed on. How do you feel about this accusation?

There's a bit of C86, yeah. There's a pretty big kiwi sound to these bands as well though. Grass Widow sounds a lot more like Look Blue Go Purple than the Shop Assistants to me.

Could you share some of your favorite releases by various labelmates?

I adore pretty much everything Nodzzz and Brilliant Colors have released, but what's really getting me is that new White Fence record, it's totally one of the best things to come out on any label in a very long time.

Are you guys to blame for turning on those blokes of MGMT to the Television Personalities?

No. But it's touching they wrote a song about Treacy, dude needs some attention right now.

Do you have your own “Song for Dan Treacy?”

No, nothing specific like that. “Hope Everything Falls Into Place Before I Fall Into A Grave” is about the most Treacy of any song Kevin [Alvir] has written though. I think it's the best song on Revenger.

Do you feel it’s accurate to assess that Pete Doherty really has just been a second rate Dan Treacy all along? The mainstream press has washed out so many words lauding The Strokes and the Libertines as these pillars of the “indie” tag designated sub-cultural sound demographic without a word for the TVPs.

It all works in waves. Music is constantly discovered and forgotten and rediscovered. Treacy's approach to songwriting – that kind of intensely creative, vulnerable, brutally honest songwriting – was something that a lot of bands in the 80s got into and a few great 90s indie bands were interested in, but was largely forgotten about by the 2000s. But I think there are a lot of younger groups today that are finally tired of all the posturing and bullshit and are writing actual songs again, and are looking to songwriters like Treacy for inspiration. It's a pretty exciting time.

Songs such as “Pizza My Coat” sounds like your California song. Have you ever thought about moving band operations way out west?

Moving to the west coast would be pretty rad, yeah. Especially with all the great bands in San Francisco right now. But we've got our friends and loved ones and pizza in New York, so breaking away would be tough.

Then again “Restraining Order” and “Hold My Hand” both have an East Coast quality of cool. What is the process of writing/recording songs for Knight School?

It changes slightly from song to song, but the general paradigm is Kevin as songwriter and myself as producer. My real motivation for joining this band two years ago was Kevin'ssongwriting. He has an extremely rare talent, and it has been so exciting and inspirational to be around it. Kevin's been doing the home recording thing for years and I grew quite obsessed with it when we started working together.”Hold My Hand” is the first song that I wrote and recorded by myself in this band, and I don't think I could've gotten it together without Kevin being around.

There is a more sentimental vibe on Revenger than your 2009 Lostmusic Records release, The Poor and Needy Need to Party. What was different for you in the process of making Revenger from the first album?

The first record is almost entirely Kevin. When I joined the band, Poor and Needy was mostly done; I workedon it a tiny bit, mixed things here and there, but it's really his album. By the time we had started working on songs that would end up on Revenger, Knight School had become more of an official collaboration. Kevin wrote the core of the songs, lyrics and changes and all that, which I would rearrange and add a lot of instrumentation to. Most of the music was sketched very quickly in its impetus and then fleshed out over a long period of time, often to the point of overproduction. It was pretty educational. We were learning and experimenting and growing alot as musicians when we were working on this stuff and the songs feel really special because of that. And I would agree that it is a more sentimental record. Kevin laid himself out pretty bare in the lyrics.

What’s your favorite album by the Byrds?

Younger than Yesterday is a longtime favorite, but I've been playing the shit out of their first album lately. “The Bells of Rhymney” is such a perfect song.

Can you share details or lyrics on any upcoming songs or releases in the works?

We made a few copies of a CD-R around the same time the LP came out containing newer material which I think will be eventually boiled down to a another release, but nothing official has been worked out yet. Revenger is going to be released on CD in Japan later in the year. Kevin is writing alot, for Knight School and his solo project, The Hairs, and I've been busy jamming out with some dudes and recording and putting something of a garage-pop-psych project together. No idea what's to come. We don't have a game plan really.

That song “Maggot” still rings in my ears. Thank you for all the pop tunes.

Thanks! Sorry if they're too loud.