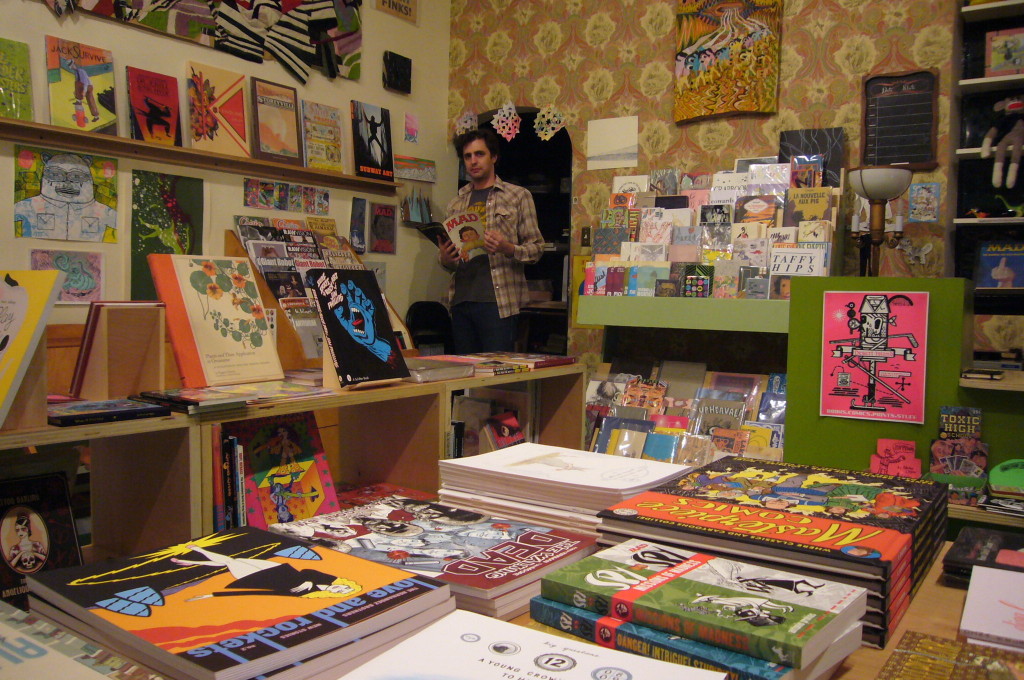 The comics, zines, and copies of Smoke Signal, the comic newspaper created by store owner Gabe Fowler, are lovingly arranged, and Fowler's genuine care for the product and the artists that create it is obvious when you start talking to him. The place is one half on-going DIY art project, the other half, weird indie bookstore, and it's helping to support an entire community of artists that might not otherwise have the sort of support in other comic or bookstores.

When people ask you what you do, do you answer “I sell comics” or do
you go into it more like “I sell comics, zines, graphic novels, etc.”

I usually just say I have a weird book store.

What made you decide to open a comic book store?

A sense of disappointment with most other comic book stores. Dissatisfaction can be a great motivator – just look at Mick Jagger. Plus I didn’t want to be an art handler for the rest of my life.

Does that usually put an end to the conversation?

Nah, that’s the beginning. Then I start yammering about Mad Magazine for hours as my victim plots their escape.

Tell me about your window displays. Who puts them together?

It’s always a different featured artist, like a mini-gallery. We’re lucky because our storefront has a really unique window which is great for installations. I guess I’m the “curator.” Some people have been invited to do a piece, some people have proposed stuff, and its fairly casual like that.

When you were looking for a location for Desert Island did you have the idea to have a large window to make elaborate window displays?

There’s a lot of luck involved in this stuff. I definitely had a wish list of things I wanted for the store, including a large window space
for projects. I also wanted a basement for rock shows and a bedroom in back, but you can’t have it all.

Above your store the sign says you sell bread, do people ever come in looking for baked goods?

Every day. The actual bakery down the block should be giving me kickbacks for all the people I send over there.

This summer you published your first issue of all-comic newspaper Smoke Signal. Are we going to be seeing another issue in the future?

The second one is already out! I’m trying to do this every three months, and so far we’re on schedule. It’s hard because there’s no ads and the paper is free so I have to scrape together the dough every time. But it’s really fun to produce, and it gives me an excuse to have a big party every three months. So get ready to party in December when #3 comes out.

What is the best selling item in your store?

Lately, “Asterios Polyp” by David Mazzucchelli, which is definitely amazing. He worked on it for ten years.

In the 1988 film Big, Tom Hanks character Josh Baskins suggests that they create some sort of portable comic book viewer. Did the movie Big contain a prophesy of the Amazon Kindle?

I thought Al Gore invented the Kindle along with the internet itself.

Do you think there is a negative stigma surrounding comic book shop guys due to The Simpsons?

What do you mean? That guy rules.

Is he your favorite character on the show?

Chief Wiggum is probably my favorite. I like them all except Sideshow Bob, who is totally annoying.

I didn't realize that people did Yelp reviews for comic book stores, but eleven out of twelve reviews for Desert Island are five out of five stars, and then there is the one bad review in the bunch by Joe R:

Seems to be a pretty bad business model, honestly. Catering towards the privileged, entitled hipsters that never spend any money on anything. The joint feels more like a vanity pet project than a store. Yeah, they've got some good stuff, but this is NYC. It's not hard to fine. With truly great comic shops close on various trains, I don't see why I need to come in here and smell the customers.

Is Joe R. your friend, and did you tell him to write that bad review because everybody likes Desert Island so much?

I don’t know him. This guy Joe Rice is good friends with the owner of another comic shop in town, and he clearly posted this review to fuck with me in the most pathetic manner possible.

What do you think makes a hipster “privileged”?

Let’s get something straight: people who use the word “hipster” in an accusatory manner are coming from a place of deep, deep insecurity.