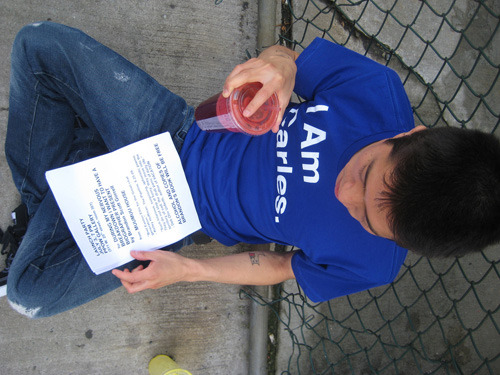 For the most part I think musical movements after the mid-1950's — with the exception of hip hop in the early '80s to the early '90s, the early days of hardcore, and anything related to Fugazi — are stupid. The movement we know as Punk rock was nothing new in the 1970's, no matter how many Legs McNeils want to tell you otherwise. With all due respect, weirdo kids were getting fucked up and writing sloppy songs long before The Ramones took the stage at CBGB's or Sid Vicious decided to get knife crazy in the Chelsea Hotel. Somebody with a pen, though, got a hold of this period in history and shaped it into the weird, post-modern fairy tale we all know and love today.

The art form that writer Tao Lin deals in could currently be seen in a place not totally unlike music in the late 1970's. He seems not to take note of the precarious state of modern writing, and it doesn't take much to see that he is writing the way he wants to write, no matter how mundane or idiosyncratic. You might not like him, his writing, or his peculiar brand of showmanship, but if you know anything about history, you know that it's people like Lin that everybody ends up copying. It's about live readings consisting of Lin reading his Twitter feed, and it's about saying something, when your sentences consist of very little. This is the space Lin occupies that is all his own, and with his newest novella, Shoplifting From American Apparel (Melville House), he proves that you don't have to be William Burroughs or Dennis Cooper to be subversive, you can simply discuss a perpetual existential crisis of social media websites, text messages, and punk fests in Florida. There is no making sense of any of it, so we might as well just point out what's what.

Lin answered some questions via e-mail.

I once drunkenly accosted you to tell you how much I loved your story in the Vice fiction issue that came out a few years ago. (Sorry about that.) That story happened to be the short story which would be turned into this novella, Shoplifting From American Apparel. Did you have any idea then that you wanted to expand upon this story?

How long did it take you to write this?

Do you think/want/care for Dov Charney to read this?

If he reads it, what do envision his reaction will be?

I think he will either like or not like the book, determined by his preference re “prose style” or “plot,” not by the book’s shoplifting elements, which I feel he will probably feel amused by or indifferent toward.

Have you ever been to jail? Does it suck?

What kind of music did you grow up listening to? You seem to incorporate a lot of the philosophies and terms that one would pick up growing up in the punk scene. There seems to be this worry about selling out, and the disdain you seem to harbor against corporations, for instance.

My current top-played songs on iTunes are probably mostly by Neva Dinova, Dntel, Rilo Kiley, Stupid Stupid Henchmen, No-Cash, and Modest Mouse. Other bands I have “developed a noticeable interest in” for “[an amount of time between 1 week and 1 year, mostly before I was 15 or 16]” include, but are not limited to, Dave Matthews Band, Marry Me Jane, Sublime, Everclear, Miracle of ’86, Mock Orange, Bad Astronaut, Star Fucking Hipsters, Morning Glory, The Honor System, Alkaline Trio, The Chinkees, The Blow, The Microphones, and [almost every band on Fat Wreck, Asian Man, Jade Tree, Hopeless, Plan-it-x, No Idea, G-7 Welcoming Committee].

There seems to be a great deal of myth surrounding you, do you like that?

One thing I noticed was in Gigantic Magazine, in which they mentioned that you claim to have written 10,000 hours. Do you ever worry about burning out?

I don’t worry about “burning out.” I sometimes say or think “my career is over,” but it feels like “such an” all-encompassing, “pervasive,” “constant” thought that I don’t really “worry” about it, in the same manner I don’t really worry about “I’m going to die” or “the universe is arbitrary.”

You sold your Myspace account for 8,100 dollars. You had plans to “Go on a 7-day Alaskan cruise with my girlfriend or buy a 1″ by 1″ ad in the next New Yorker displaying my blog’s url in size 6 font.” Did you do any of that?

You mention a lot of websites in Shoplifting From American Apparel, do you have a particular website that you like the most?

People like to talk about your relationship with Hipster Runoff, and you like to deny that you are Carles, yet you model his new shirts that say “I am Carles.” Are you trying to tell us something?

Carles and I were together in a creative writing class at NYU. He wrote long, elliptical, and often nonsensical (though in a manner that almost always, in my view, enhanced his marvelous work) stories about growing up in Texas, how he felt sad for the cattle, or what he thought was cattle—it might’ve been tumbleweed or a group of environmentally-friendly cars—in the distance, that he sometimes saw from his fourth floor bedroom’s window. Carles was a marvelous writer of unbelievable range and a deep understanding of Spanish. Today Carles’ blog gets “really mad hits” and has a very impressive twelve-month chart re Sitemeter. I’m proud of him. Sometimes a blog seems to get a lot of hits, based on Alexa, or something, but then when they link your blog you look at how many hits your blog is getting from their blog and it seems to be 20 or 100. When Hipster Runoff links your blog in the alt report it’s quickly apparent that his blog “actually” gets “mad hits.”

You talk about food a lot, do you ever write so much that you realize you have been starving yourself?

I don’t think that has happened.

Depression and sadness are overriding subjects in your work. Should we be worried about you?

No, I think. If a person reads all my books I feel that they will learn that “I don’t want or need anyone’s help.” And also that “I don’t have advice and cannot help anyone else.” Though that concept by itself is probably “helpful” to some people.

What would make you really happy?

That seems “too complex” or “too abstraction-based” a question for me to answer in a way I would feel satisfied about, in this format. A “quick and true but unsatisfactory, to me” answer might be something like “chemicals in my brain doing certain things.”