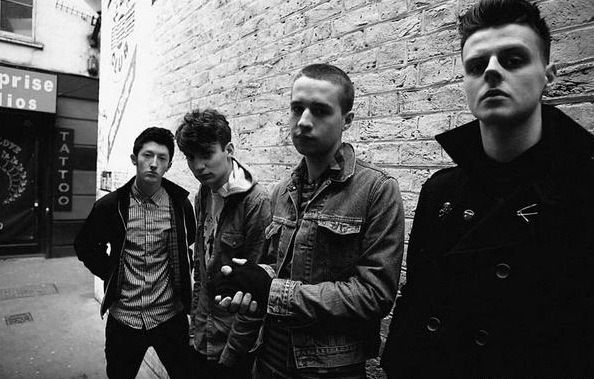 UK pop punk band Sharks recently released a 7″ inch split with San Diego Punk band Northern Towns on San Francisco D.I.Y label Swagger City Records. It includes the tracks “Mirrors Within Mirrors” and “Museums” and a cover of “Brassneck” by The Wedding Present. The limited vinyl is available at the Swagger City Store.

We traded emails with James Mattock of Sharks recently to get the low down on the UK band's affiliation with Swagger City. Mattock included a photo of Swagger label head Chris Mason dressed as Kenny Powers of the HBO series East Bound and Down as photographic evidence of Mason's exceptional skills at being the best fucking label head in the world, ever. The two also discussed rubbish.

Are you excited to tour with the Gallows?

Definitely. Gallows had a huge impact on our band when we were starting out, so it's a huge achievement for us to be supporting them. Just to be out on the road for that amount of time excites us too. We've never been on tour for that long before.

Who plays with you on your ideal tour?

It's hard to say because if I was on tour with all my favorite bands, I wouldn't want the hassle that comes with playing, I'd just want to enjoy the shows. I can't really think of a band we wouldn't want to tour with either. We'll play with anyone, unless it was really extreme like say, Skrewdriver or The Used.

How did you first get in contact
with Swagger City?

Swagger City found out
about us because of the band Northern Towns, it was their idea to do a
split with us, and Swagger was the label they found that dug both bands
enough to agree to release a split. We're also in the process of putting a single out
through Atticus Black, a label set up by the people at the clothing
company, Atticus. That's just a one off 7″ release for now, we
recorded it last week.

It's amazing if you enjoy
self-righteous singer/songwriters who play the same bar every week and
40-year old cover bands playing Kings Of Leon and Green Day songs.

What's it like to shop at that massive Bull Ring Shopping centre?

It's
fun, but you can't go there to shop. It's stress hell and everything is
overpriced. But it's a trip walking through it. It beats anything to do
with the town where I come from.

What's the last record you got, and did you buy or download?

I
really want to get the new Dead To Me record. I downloaded it because
I'm desperate and poor. But now I'm guilty and still poor. It's amazing
though.

What your favorite song off the new Swagger City 7″?

I
haven't heard the Northern Towns songs yet so that narrows it down. The
two original songs we recorded are really old, we recorded them two
years ago this month, so it feels weird to be releasing them. I couldn't
choose between the two, so I'm gonna have to say “Brassneck.” I'm really
pleased we did it, I'm a big Wedding Present fan.

Any other covers that you and the band are considering for the live setlist?

We're
currently working on covering the Dead Kennedys song “Moon Over Marin.”
Hopefully, we'll get to put that on some b-side or something, things
like that are really fun to do but apart from those covers we haven't
tried anything else. Apart from the brief renditions of “Blitzkrieg Bop” in band practice when things get distracting.

There's
a rumor I've heard floating about that Mick Jones has been hanging
around your studio during recordings. Would you care to elaborate or
debunk this bit of hearsay?

I honestly have no idea where this rumor has circulated from. Mick would probably think it was rubbish.

Any US tours in the works?

There's a hope of coming to Texas next year and playing South By South West, but who knows, we might break up.

When
are you coming to San Francisco to party at the Swagger City house in
the Mission and pass out on their couch? I'm telling you, 24th Street
is the marriage of so many worlds! Taqueria Vallarta is amazing in the
wee early hours, but I can't recommend Taqueria Guadalajara.

It's hard to know, destroy and rebuild music… I guess.

Best of luck mate, thanks for the bother!