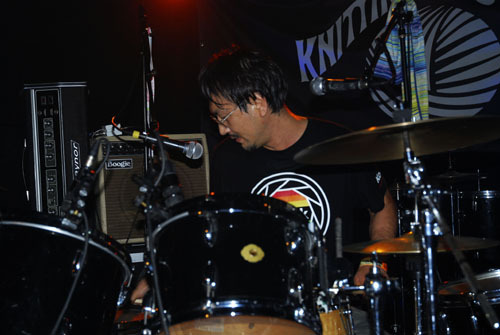 After a quick stop, during which I could hear but not see the dueling casio noise-pop of Yip-Yip, somewhere in the mobbed space at the back of the Old Office, I returned to the main stage to ensure a spot for Japanese noise-rock bass and drums two-piece Ruins, who I've described in the past as “Lightning Bolt, except with opera singing and jazz”. Except it turns out that drummer and band nucleus Yoshida Tatsuya, following departure of the last decade's bassist Sasaki Hisashi is currently attempting the difficult business of playing solo as Ruins Alone. While I definitely missed the presence of an actual bassist on stage, Yoshida filled in effectively by pausing to set up fields of electronic noise and triggering backing bass tapes (which he almost seemed to be tweaking in real time; if he didn't have his feet planted squarely on the kick and high hat, I'd say he was varying the intensity with a pedal somewhere). And of course, his drum work was indisputably virtuosic, delivering a variable flurry of blows, snaps, and thuds.

Ducking out of Ruins early, I head downstairs for one of the other acts I'd most been anticipating seeing, Wizardzz, the new two-piece of Lightning Bolt bassist Brian Gibson on drums and Rich Porter of Bug Sized Mind on synthesizer, who released their debut album last year. Maybe CMJ week was just finally starting to catch up with me, or maybe the duo really had eschewed most of their former demon-carnival melodics for indistinguishable noise washes, but I had a hard time getting into any of the songs. They weren't even singing this time out, and the costumes? Decidedly less ridiculous than past photos had prepared me for. Porter at least had some ceremonial robes but Gibson was decked out in what looked like a sweatshirt and chinos. Come on guys, you're better than this.

I was actually thinking of giving in to creeping exhaustion and dulled ears, but decided instead to chug some Vitamin Water and head back into the fray to at least catch the start of AIDS Wolf. This was a good decision, it turns out, as the Montreal noise-punk outfit woke me back up and dragged me into the central mosh pit which, despite thinning crowds, was soon going strong. Now, admittedly, the band's lancing screech of guitar treble and din of dissonance wasn't exactly setting them apart from plenty of other current noise-punk/no-wave bands in operation, but the lead singer, decked out and flinging herself around the stage like a mime on PCP, really did. Especially when she flung herself off the stage and into the crowd itself, running among us and eventually falling, wailing against one guy perched on the edge of the stage. Bonus points for the best audience interactivity of CMJ so far.